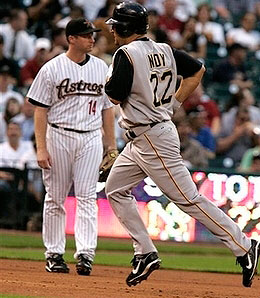 While his hammy could be an issue going forward, Xavier Nady looks ready to contribute down the stretch.

The Pirates have stopped the post-break bleeding with a 10-8 August record, including wins in three of their past four, but as usual, it’s a case of too little, too late. In fact, Pittsburgh currently has the NL’s worst record, with only Tampa Bay sporting a worse mark among all MLB teams. Sound familiar?

It’s small comfort to the team’s fans, but the Buccos need just 16 wins in their final 40 games to enjoy their most wins since 2004. Like I said, small comfort. Here’s a more sobering thought: it would take a 29-11 finish for Pittsburgh to avoid its 15th straight losing season.

Woeful or not, let’s take a look at some of team’s individual performances.

Xavier Nady is making progress from his strained hamstring, starting the past two games – his first starting assignments since July 31. The team had planned to slowly ease him back into action, but considering he’s 5-for-7 with four runs, three RBI and two walks in the two games back, Nady looks ready to roll. Nady, a player we recommended looking at in late-June, has suffered a slight reduction in his already less-than-impressive walk rate this season, but despite this recent injury setback, he’s on pace to bust his career highs in runs and homers. Given that Nady has continued to get better as the season has progressed, you need to get him back in your lineup and hope he’s stays on a roll for the final few weeks of the campaign. Bear in mind that the hammy has been an issue all year, so you may need to yank him at some point, but for now, it’s full speed ahead.

Just when lefty reliever John Grabow was starting to round into form after a substandard first half, concerns are arising again about his elbow. After tossing two perfect innings on Thursday, Grabow complained of stiffness in his pitching elbow, and he’s been unavailable the past three games. This is the same elbow, of course, that sidelined him for a good chunk of spring training and led to him beginning the season on the DL. It wasn’t until after the all-star break that he seemed to be regaining his form, going 1-0 with a 2.51 ERA in 14 games with 15 Ks and just three walks in 14 1/3 innings. Grabow has tossed five straight scoreless appearances and a prolonged absence would leave Damaso Marte as the only southpaw in the Pirate pen. They’re not yet discussing a DL stint for Grabow, but obviously it’s a distinct possibility.

With Ryan Doumit still out (but making progress from the sounds of it), Ronny Paulino is getting worked hard behind the plate, making seven straight starts before getting part of the day off yesterday. Carlos Maldonado, up from Triple-A where he’s struggled badly this year, got his first start, going 0-for-1 with an intentional walk. The 28-year-old, originally signed out of Venezuela in 1996 by Seattle, is obviously not the answer behind the plate for the Buccos. We already discussed how Paulino is not the long-term catching solution for the Pirates, so who does that leave? While Andrew Walker has been very impressive in the NYPL, he’s still a couple of years away, leaving Pittsburgh with really no one at the upper levels of the minors ready to make a legitimate claim on being the catcher of the future. This is an area the team has struggled with ever since dealing Jason Kendall away. Having said that, there are some interesting names that will be coming on the market this offseason, so it would behoove the Pirates to throw a little money at, say, a one- or two-year solution. Brad Ausmus, Michael Barrett, Ramon Castro, Kendall, Jason LaRue, Paul Lo Duca, Jose Molina, Jorge Posada and Yorvit Torrealba will all be free agents, while I-Rod and Javier Valentin can each opt out. Of those, you figure Barrett, Lo Duca, Posada and Rodriguez will all be too expensive, LaRue is pretty useless and Molina is unproven as a starter. I can’t see Kendall coming back; besides, he can’t hit his way out of a paper bag anymore. Ausmus or Torrealba might be decent choices, but if I’m the Pirates, I make a generous offer to Castro. Give this dude 450 at-bats, sit back and watch what happens. You’ll have a serious offensive force on your hands.

By RotoRob
Tags: Pittsburgh Pirates
This entry was posted on Monday, August 20th, 2007 at 12:54 pm and is filed under BASEBALL, Team report. You can follow any responses to this entry through the RSS 2.0 feed. Both comments and pings are currently closed.