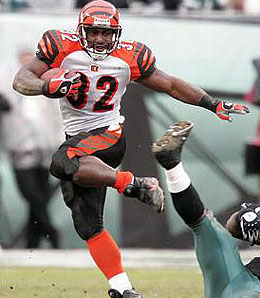 Rudi Johnson being taken fifth overall in our fantasy draft wasn’t much of a shocker.

So Derek and I were minding our own business, chatting about important things like how bad Larry Johnson will be and how MTV’s The Hills is the greatest show since MTV’s Laguna Beach. It was at this point that RotoRob started screaming at our poor souls.

“DO THIS DRAFT, YOU WORTHLESS DOLTS!”

After Derek stopped crying, we decided it would be best to do the master’s bidding. We joined 11 other fantasy football fanatics in what will go down in history as one of, if not the most suspenseful and cut-throat fantasy football drafts ever. Okay, maybe not, but it’s worth analyzing.

We’ll take a look at each round as a whole, and specifically explain our picks. Going into the draft, having the third pick, we knew who we weren’t going to take. But, aside from that, we figured we’d take some risks and go for the best team possible. So without further ado, here’s our draft. We were RotoRob’s Minions, which means we already had the best team name. Yay!

By Andy Goldstein
Tags: fantasy football
This entry was posted on Tuesday, August 21st, 2007 at 6:40 pm and is filed under Draft strategy, FOOTBALL, Mock drafts. You can follow any responses to this entry through the RSS 2.0 feed. Both comments and pings are currently closed.