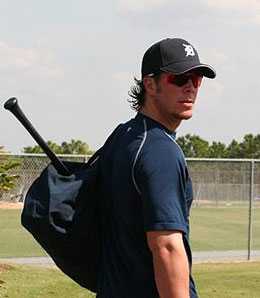 Tigers prospect Brent Clevlan is being passed by thanks to his continued struggles. (Roger DeWitt)

On Friday, we discussed how Virgil Vasquez got skipped over for promotion by the Tigers. Today, we’ll bring you up to speed on yet another Detroit farmhand who has been passed by. Watching Cameron Maybin go from High-A to Double-A to the majors in about a week’s time really helped illustrate how far Brent Clevlen has slipped in the organization’s eyes. Ranked by Baseball America as the third-best Detroit prospect heading into the season, Clevlen has endured a second straight tough season, and if the 23-year-old outfielder doesn’t turn things around soon, I have my doubts about his ability to stay at the Triple-A level. This is a kid who was named to the AFL Rising Stars team in 2006, and – albeit, surprisingly – earned a 31-game trial with the big club last year. This season, however, a broken finger in May helped derail Clevlen’s season, forcing him back to the GCL for a 14-game rehab assignment. He began to turn things around in July, even earning International League Player of the Week honours for the period ending July 16, but Clevlen has gone right back into the tank of late. He’s currently mired in an 0-for-22 slump, with a .143 BA over his last 10 games and a .196 mark in August. This swoon has helped drop Clevlen’s overall numbers down to a 661 OPS through 75 games and 274 at-bats at Toledo. He has 11 doubles, four triples, six homers and four steals with an ugly 31/94 B/KK ratio. The big problem here is Clevlen’s inability to hit righties – his OPS is just 626 against them. If this continues, the best Detroit’s second round pick from 2002 can hope for is to be a fifth outfielder/platoon player type.

In scouring the Mud Hen roster, I came across Henry Mateo’s name and realized he will soon be part of a dying breed – players who once wore the uniform of the Montreal Expos. Over the next few years, this will become a bigger and bigger rarity. At any rate, it was somewhat jarring to see Mateo lacing ’em up for anyone other than the Montreal/Washington system, where until this season he had spent his entire career since the Expos took him in the second round way back in 1995. The 30-year-old second baseman looks like he still has a bit of life left in the tank, enjoying his finest Triple-A season since 2001, the very first time he ascended to that level. Along the way, Mateo has appeared in 190 games for the Expos/Nats, recording a 581 OPS and even hitting his first major league home run last season. With a four-game hitting streak on the go, Mateo is batting .270 through 80 games this year with 39 runs, 20 RBI, 15 doubles and 29 walks for a 725 OPS. After topping 30 steals for Triple-A New Orleans last year, Mateo is proving he can still run this season with 20 steals – 14 of them since the beginning of July. I doubt he’ll see the light of day in Detroit this year considering Omar Infante will still need to come up when rosters expand, but with a .300 BA vs. lefties and his speed, Mateo could still help a big league club in a limited capacity.

Every time I think Dennis Tankersley might be turning the corner, he quickly does something to scuffle that notion. Back at the end of June, I wrote about the fact that he was missing opportunities to move back to the majors because of his ineffectiveness. Well, Tankersley must have been reading, because he got on a serious roll shortly after that, enjoying a huge month of July (2-0, 1.72). However, as he is wont to do, that hot streak evaporated as quickly as it arrived, and he’s struggled to a 1-2, 6.38 mark in August. Overall, the 28-year-old righty is 9-7, 4.75 for Triple-A Toledo, and as long as he keeps allowing as many baserunners as he has (125 IP, 154 hits, 46 walks, .314 BAA), Tankersley won’t be a candidate to return to the majors for the first time since 2004.

By RotoRob
This entry was posted on Sunday, August 19th, 2007 at 12:12 pm and is filed under BASEBALL, Minor Matters. You can follow any responses to this entry through the RSS 2.0 feed. You can leave a response, or trackback from your own site.