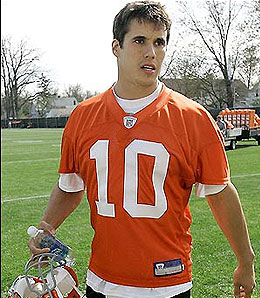 After his strong debut on Saturday, some are wondering if Brady Quinn has a chance to be the Browns’ starting QB.

Brady Quinn put on one hell of a show in the final quarter of Saturday’s pre-season tilt, and suddenly there is talk that the rookie has crept into the starting quarterback battle for the Cleveland Browns.

It didn’t hurt that frontrunners Charlie Frye and Derek Anderson both put in efforts worthy of being booed by Browns’ fans.

But with his two fourth-quarter touchdown passes highlighting a 13-for-20, 155-yard showing over the final 9:20, Quinn created a lot of believers in his first NFL exhibition action.

For now, Coach Romeo Crennel is hedging his bets, insisting that the kid still needs plenty of prep time to grasp the offense before he’s ready to take a more active role. But he may just be saying that to keep the pressure off his prized rookie. The fact that Crennel conceded that he might postpone by a week naming his starter for the September 9 season opener definitely spoke volumes.

Here’s what we had to say about Quinn when he was drafted.

The former Fighting Irish star wasted little time in making his presence felt, connecting with Chris Barclay on a screen for a 30-yard gain on his opening play. In fact, the kid nailed his first five passes before finally missing one.

On his second series, Quinn drove the Browns 92 yards in less than two minutes for another touchdown.

Not bad for someone who had missed 11 days of training camp before he finally agreed to terms. That holdout made most believe his chances of winnings the starting gig were over before they began. But Saturday, Quinn looked like a man making up for lost time.

Crennel is right to hedge his bets; after all, Quinn does have plenty to absorb in a short period of time. But if Frye and Anderson keep playing as poorly as they did on Saturday, when each were picked off once, Quinn could win this competition by acclimation.

Before we completely jump on Quinn’s bandwagon, however, it would be wise to see how he performs against the other team’s first or second team defenders.

By RotoRob
This entry was posted on Sunday, August 19th, 2007 at 11:01 pm and is filed under FOOTBALL. You can follow any responses to this entry through the RSS 2.0 feed. You can leave a response, or trackback from your own site.