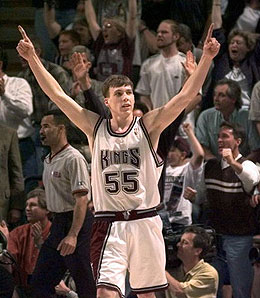 Could Jason Williams be headed back to the Kings in a deal for Mike Bibby? Not as long as he is the key component of the offer.

The word out of Miami is that Sacramento is still considering dealing point guard Mike Bibby, with the Heat being the possible destination. This current rumour suggests that Miami would part with Jason Williams, and possibly Udonis Haslem (Michael Doleac’s name has been mentioned in other places as well).

Now, trading Bibby and Ron Artest (rumoured to be New York-bound) remains a possibility, but not in the deals we’ve been hearing about.

First of all, with Minnesota in a clear rebuilding mode following the Kevin Garnett trade, and the Clippers losing Elton Brand, Sacramento has a very good opportunity to make a run for the playoffs next year, so contrary to what most believe, the Kings are not absolutely in a rebuilding mode.

Having said that, if they were to be tempted into a full-scale rebuilding program, J-Will wouldn’t exactly be the prize that would make them head in that direction. The reported offers from the Knicks (that involve expiring contracts in return for Artest) similarly wouldn’t make the Kings budge.

The other dead giveaway that this is off-season smoke-without-fire reporting is that these rumours are being started by the local papers in Miami and New York; the Sacramento Bee – which offers very fine coverage and definitely stays on top of all team happenings – isn’t legitimizing these rumours with any coverage. That tells me they know this is bogus.

Now if a bunch of draft picks or some good young talent such as Dorell Wright from the Heat or Nate Robinson/David Lee from the Knicks is suddenly put on the table, well, then we may have something worth following.

But for now, I’d assume that Bibby and Artest will once again be stuck trying to co-exist come training camp this fall.

By RotoRob
This entry was posted on Saturday, August 18th, 2007 at 2:01 pm and is filed under BASKETBALL, Rumours. You can follow any responses to this entry through the RSS 2.0 feed. You can leave a response, or trackback from your own site.