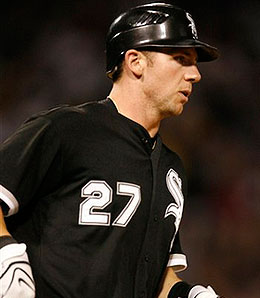 The way Josh Fields is crushing the ball lately, he really needs to be scooped up off the wire. (AP Photo/Nam Y. Huh)

It is that time of the week again and I noticed something in my Wire Troll scanning tool — the guys heating up over the past week are rookies. So, now the question is do I take a Josh Fields or go with someone more established? Well, that’s why you opened this article, to see what I suggest. Right?

Josh Fields: Well, he is available in almost all my redraft leagues, and now may be the time to snag him. I was a little worried about the White Sox moving him to the outfield, but his recent strong play has put those talks to rest. Over the past week, Fields has been rocking the ball to the tune of a .308 batting average with five runs scored, four long balls, and nine RBI. Over the past month, he has scored 12 runs, hit eight homers, driven in 21 runs, and swiped one base. So, as you can see, he is starting to heat up and I think now is the time to jump off the Troy Glaus bandwagon and on to the Fields express!

Kevin Kouzmanoff: If Fields is not available, give Kouz a look. Scoring four runs, teeing off twice, knocking in seven runs, and stealing one base is what Kouzmanoff has done over the past week. Morgan Ensberg has been seeing time at third base lately and may get a start or two per week, but, Kouzmanoff is the starter in San Diego now and for the long term. If you can’t get Fields, and still need a third baseman, pick up Kouzmanoff.

Yadier Molina: This is one for you deep leaguers. Molina is not someone that you should ever be drafting, but, when he heats up, as he is doing now, he is someone that you can always pick up for free. Jarrod Saltalamacchia has been nothing short of awful. I like Salty long term, but he may just be a lost cause fantasy-wise this season. So, Molina can’t be any worse, right? Over the past week, Molina is hitting .450 in 20 at-bats and has five runs scored, two homers, and seven RBI. Unless you have one of the top catchers, you are probably hurting for a quality backstop. This is one position that you can just keep adding and dropping guys in order to keep the current hot player in your lineup. And, right now, that player is Yadier Molina.

Adam Wainwright: The Cardinals are surging right now and two guys most likely on your waiver wire that should be looked at are Molina, as discussed above, and Wainwright. Over the past month, in 41 innings, Wainwright has recorded three wins, 37 punch-outs, a 3.07 ERA, and a pleasant 1.22 WHIP. I drafted Wainwright and kept my faith in him this season. His ERA is creeping down into that sub-4.00 range that fantasy owners love. I would prefer to see the WHIP far lower than 1.43 overall, but he has a 1.00 WHIP in August and you shouldn’t ignore him any longer. The Cardinals are surging, so make sure you are on the bandwagon when the wheels get up to full speed!

By James Morris
This entry was posted on Saturday, August 18th, 2007 at 12:44 am and is filed under BASEBALL, The Wire Troll. You can follow any responses to this entry through the RSS 2.0 feed. You can skip to the end and leave a response. Pinging is currently not allowed.