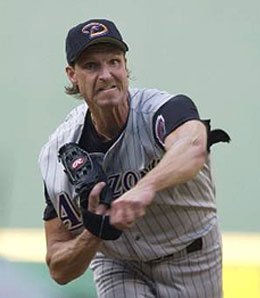 The Big Unit is enjoying a nice comeback season, but don’t be looking for the CGs from him anymore.

Matt Blake from azsportshub.com forwarded me his most recent weekly review for the Diamondbacks. Among the highlights:

Doug Davis rode his curveball to a dominant effort last Sunday before tiring late, but lasted just four innings on Friday, taking a serious bitch slapping. In his last 11 2/3 innings, he’s been burned for 12 hits and eight walks, striking out just six. Davis is in the NL’s top five in both walks and losses. Congrats, Doug. Can you believe this guy was a 19th round pick in our draft this spring?

Randy Johnson is now a six-inning pitcher. Exactly once among his nine starts this season the Unit has gone seven innings. Every other outing has been six or less.

Brandon Lyon has been pitching very well out of the bullpen. His 2.51 ERA is the lowest among the regular relievers, and he’s won four times already. His strikeout rate is unacceptably low, but I like the fact that Lyons has kept his hit rate down. Lyon is someone we recommended tracking after his solid Triple-A performance last season.

On Wednesday, Brandon Webb earned his sixth win, despite not having his best stuff. Always a good sign when you can cobble your way through and still get the W.

Brandon Medders, who has struggled all season, gave up the winning run Thursday and was promptly shipped out to Tucson. He had struck out 20 batters in just 22 1/3 innings, but he’s been too hittable and his control has shed its mortal coil.

The two hottest hitters for the Snakes over the past couple of weeks have been Eric Byrnes and Conor Jackson, the top two hitters in the batting order. Byrnes ended the week on a 10-for-21 roll while Jackson’s OPS so far in June is 1049. I’ve always liked Jackson. He was No. 21 on my top 25 prospects list back in 2006.

Friday saw the major-league debut of reliever Jailen Peguero, recalled to replace Medders. A 1.69 ERA for 26 Triple-A appearances earned the 26-year-old Peguero his first kick at the can. Back-to-back scoreless appearances so far has justified the D-Backs’ faith in him.

Alberto Callaspo was thought to be the player who would get farmed out when Chad Tracy came off the DL yesterday. After all, not only did he have a domestic violence issue to deal with, but Friday Callaspo got nailed by the old hidden ball trick. Somehow, Callaspo remained on the roster, as Robby Hammock was moved out to make room for Tracy. We were big on Callaspo earlier this season, but he has yet to prove us right.

Orlando Hudson was just 5-for-19 last week but he also drew five walks. The O-Dog has 34 free passes already, well on his way to a career high.

Mark Reynolds is slipping. He was just 2-for-21 last week. The party’s over, man. As we discussed just over a week ago, Reynolds has put himself on the map, but his PT will diminish now that Tracy is back.

Speaking of cold, Stephen Drew is stuck in a 1-for-16 skid and reliever Doug Slaten had a rough week as well. We liked Drew enough to put him on the radar in our last shortstop rankings, but he’s scuffling right now. A great buy-low candidate, especially in keeper leagues? Me thinks so.

On the injury front, only Jeff DaVanon remains out, and now it appears his shoulder woes might keep him sidelined until after the All-Star break. He’s barely playing catch, Blake reports.

Max Scherzer, the team’s 2006 first rounder who was signed at the beginning of the month to avoid going back in the draft, pitched very well in his debut at High-A Visalia on Thursday, giving up just two singles and a run, fanning eight batters in five innings. He’s been keeping in shape by pitching for Fort Worth of the independant American Association.

This season, Arizona took Indiana high-school pitcher Jarrod Parker with its first round pick, and because he’s not a Scott Boras client like Scherzer is, negotiations are expected to be completed quickly. Blake says that the D-Backs focused on pitching, taking hurlers with three of their first four selections.

By RotoRob
This entry was posted on Monday, June 11th, 2007 at 12:52 pm and is filed under BASEBALL, RotoRob, RotoRob correspondent report. You can follow any responses to this entry through the RSS 2.0 feed. You can skip to the end and leave a response. Pinging is currently not allowed.