The Wire Troll: Easy as Pie 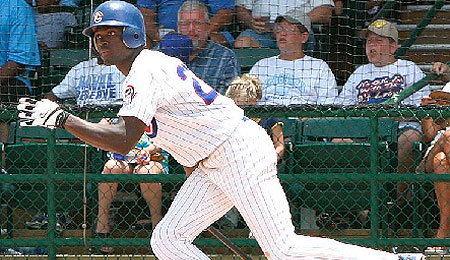 Make no mistake: Felix Pie has entrenched himself at Wrigley.

Well, it’s now mid-June and things are starting to become a bit more clear in the fantasy world. Roger Clemens is back and looked fairly mediocre, going six innings and giving up three runs. He did throw 108 pitches, 69 of which where strikes (63.8 percent), but six innings won’t help for a Yankee bullpen that is already overworked. So, what do you do instead? Read this article and troll the waiver wire with me.

Felix Pie: The young outfielder from the Cubs is looking pretty good over the last week, going 11-for-28 with eight runs, one home run, eight RBI, and two steals. If your OF is in need of some help with injuries or lack of overall production, Pie is one to look at. He should continue to score runs and knock them in, but I wouldn’t hope for many HRs. The steals are just an added bonus to help raise his stock.

Kazuo Matsui: The 2B from Colorado is off the DL and it looks like the injury may be behind him. He is batting .325 this year, and has scored 17 runs with nine stolen bases in just 21 games as he missed about five weeks with a back injury. I’d give him a strong look if you need some help at second base as his speed and RBI chances will really help at a traditionally weak fantasy position.

Jeremy Guthrie: Guthrie is an option if you are looking for an arm to fill in for your rotation for the short term. He has only given up nine runs in 48 1/3 innings as a starter this year. The fact that his command has been much better than in previous years is proof that he may be in line for a breakout season. However, Guthrie is likely to hit the wall before the year is up. We’re definitely talking about a short-term pick only, people.

Dan Wheeler: Not that he is available in many leagues, but if he is (and with this weekend’s announcement, he will start to be), I say grab him. Yes, Brad Lidge has looked a lot better in his recent outings and manager Phil Garner plans to ease Lidge back into the closer’s role starting Sunday, but Wheeler should still get his share of save chances for Houston. If you are like me and have been holding Henry Owens hoping he gets his job back, think about making the swap if Wheeler is available. Lidge, as unhittable as he’s been in a set-up role, has struggled when given the closer role in the last year, so this situation is far from resolved.

By James Morris
This entry was posted on Sunday, June 10th, 2007 at 1:01 pm and is filed under BASEBALL, James Morris, The Wire Troll. You can follow any responses to this entry through the RSS 2.0 feed. You can leave a response, or trackback from your own site.