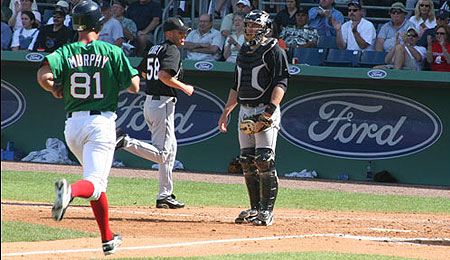 With several BoSox outfielders scuffling, David Murphy could get another look in the not too distant future.

Welcome to the newest feature on RotoRob, Minor Matters, where we’ll periodically comb various levels of the minor leagues in search of players you need to pay attention to. To kick things off, let’s take a look at some Boston Red Sox prospects currently at the Triple-A level who have caught my eye over the past few days.

David Murphy, OF: With several Red Sox flyhawks struggling and/or hurt (Coco Crisp, J.D. Drew, Eric Hinske and Wily Mo Pena), how long will it be before we get another look at Murphy, who held his own in a 20-game trial last year? This 25-year-old, taken 17th overall by Boston in 2003, showed promise last season, improving as he moved up the ladder. A native of Houston, Murphy doesn’t have one dominant skill that he can hook his star to, so he may ultimately top out as a fourth outfielder, but with his improved play at Triple-A this year (826 OPS, 30 runs, 19 extra-base hits including four homers in 54 games with solid defense), he’s proving he could help Boston, should injury necessitate a call-up.

Jon Lester, SP: Currently rehabbing a foreman injury, Lester looks just about ready to rejoin the BoSox after throwing a complete game four-hitter to lower his Triple-A ERA to 1.26 through six starts. This 23-year-old lefty is unfortunately more famous for his bout with cancer that cut short a fantastic rookie season (7-2 with Boston after dominating at Triple-A). That, however, is about to change. Lester will get one more Triple-A start Saturday and is then expected to return to the Red Sox rotation, spelling the end of Julian Tavarez’s days as a starter. Boston’s second rounder in 2002, Lester was given a $1-million signing bonus ‘ the most for any second rounder that season. So far, he’s lived up to the deal, earning Pitcher of the Year honours in 2005 in the Eastern League and proving last season that he was a worthy choice as the top starting pitching prospect in the BoSox system. Lester may still wind up being a trade chip ‘ there’s a rumour he could be part of a package to bring Mark Teixiera to Boston ‘ but wherever he lands, he’s going to be someone you want to have on your squad. Lester may experience more growing pains, especially if he has more control issues, but I love his long-term prospects.

Jacoby Ellsbury, OF: While Murphy would be a logical short-term fill-in and, as discussed, profiles more as a fourth outfielder, Ellsbury is the team’s top prospect and centre fielder/lead-off hitter of the future, a future that appears to be coming very quickly. Taken 23rd overall in the 2005 draft, this 23-year-old has shot through the system, last year swiping 41 bases between High-A and Double-A and playing better at the higher level ‘ always a great sign. Ellsbury began this season back at Double-A but he was absolutely dominant, prompting a promotion after just a few weeks. Since landing in Triple-A, Ellsbury has more than held his own, batting north of .275 with 23 runs, 13 walks and 12 steals in 28 games. Combined, he’s batting .344 with 39 runs, 19 walks and 20 steals in 45 games. Sound like a capable lead-off man? Some are calling for him to be installed at the top of the BoSox order now with neither Julio Lugo nor Coco Crisp looking like they can effectively do the job. While Boston would likely need to include Ellsbury if it plans to land Teixiera, another option would be to ship Crisp out and let the Ellsbury era begin in Beantown now. Personally, I wouldn’t rush this phenom. He’s close ‘ real close, but could use a bit more seasoning judging by his .190 mark vs. lefties.

David Pauley, SP: Pauley, as we mentioned earlier this season, has looked fantastic this year. An eighth-round pick by the Padres in 2001, Pauley was acquired by the Sox in 2004 in the Dave Roberts trade. Last year, the righty was superb at Double-A, but had problems at Triple-A and made three uninspiring starts in Boston when David Wells got hurt. Pauley, who turns 24 in a couple of weeks, has looked vastly improved this season, going 2-1, 3.19 through 10 games (nine starts) with just 50 hits allowed in 59 1/3 innings and a fine ratio of 46 Ks vs. 14 walks. He’s limited opponents to a .221 mark. While Pauley is prone to occasional bouts of wildness, he’s been a much more composed pitcher this season and, unlike last year when he was thrown into the fire, he’ll be ready the next time Boston needs him.

By RotoRob
This entry was posted on Wednesday, June 6th, 2007 at 10:41 am and is filed under BASEBALL, Minor Matters, Prospects, RotoRob. You can follow any responses to this entry through the RSS 2.0 feed. You can skip to the end and leave a response. Pinging is currently not allowed.