Dear RotoRob: The Hunter and the Haunted 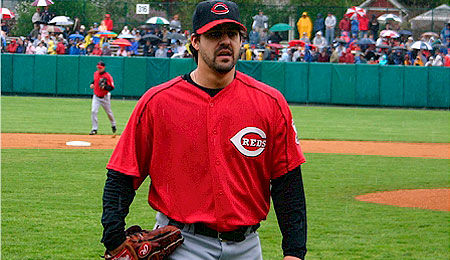 Josh Hamilton has been a revelation this year, but keeping him over Hunter Pence? We don’t think so.

Hey, I have a tough decision. I have Josh Hamilton on the DL and I picked up Hunter Pence. When Hamilton comes back I need to decide which one I should keep. I only have one spot left. Who should I keep?

Last time I looked Pence was hitting .355/.389/.589 and Hamilton was batting .261 with a .336 OBP before the injury. Hamilton had to go on the DL for gastroenteritis, which means he had a bad tummy ache (at least that’s the Kool Aid the Reds wanted us to drink) and had to miss work for 15 days.

Hamilton is off the DL now, and doubled Tuesday night in his first game back, but Pence just won’t slow down (.400 in the past week).

By James Morris
This entry was posted on Wednesday, June 6th, 2007 at 5:46 pm and is filed under BASEBALL, Dear RotoRob, James Morris. You can follow any responses to this entry through the RSS 2.0 feed. You can skip to the end and leave a response. Pinging is currently not allowed.