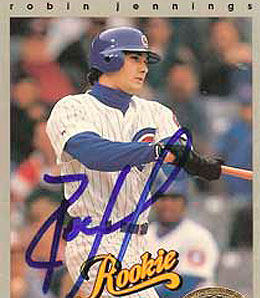 Don’t throw away that autographed Robin Jennings card just yet; he’s back in professional baseball and just a level away from playing in the majors for the first time in six years.

An article I read today in the Columbus Dispatch, while not quite qualifying for our traditional ‘What the Hell Ever Happened to’.’ series, interested me enough that I thought I’d recount the tale of Robin Jennings.

To set the stage, does anyone remember Jennings, an outfielder/first baseman who, despite his low draft status, rose to become a Southern League All-Star in 1995 and the 10th best prospect for the Cubs in 1996?

Now 35, Jennings is back in organized baseball with the Nationals organization, playing professionally for the first time since 2003.

The chances of him making it back to the majors are pretty slim, but according to Triple-A Columbus manager John Stearns, Jennings was the best hitter in the minor league camp for the Nats this spring ‘ good enough for him to land a minor league job at Double-A. The team would have actually preferred to place him at Triple-A, but there were too many candidates and not enough roster spots.

Let’s recap his career and how he wound up back in professional baseball.

Taken in the 33rd round in 1991 by the Cubs, Jennings rose through the team’s minor league system fairly quickly, really arriving as a serious prospect after his All-Star season at Double-A in 1995 when he hit .296 with 71 runs, 51 extra-base hits and 79 RBI in 490 at-bats with a strong batting eye (44 walks/61 strikeouts).

The following year, he was even better in a half-season at Triple-A, mashing 18 homers and driving in 56 runs with a fine 880 OPS in 86 games. That earned him his first taste of big-league ball, 31 games with the Cubs down the stretch in 1996.

Injuries stalled his career over the next three years, as Jennings saw action in just 14 games with the Cubs over that stretch before the team let him walk as a free agent.

That winter, Jennings signed with the A’s, and spent 20 games in the majors with Oakland in 2001 before getting dealt to Colorado in July for Ron Gant. He appeared in all of one game as a Rockie and two weeks and change later was again involved in a trade, this time getting sent with Todd Walker back to Cincy for Alex Ochoa.

And then came Jennings’ last hurrah as a big leaguer. In 27 games with the Reds, he hit very well (.286), a performance highlighted by a career day in which he drove in seven runs in a game.

He’s never been back to the Show since.

In 2002 and 2003, Jennings remained with the Reds, playing in Double-A and Triple-A before a shoulder injury that would have required him to miss the entire 2004 season prompted him to throw in the towel and call it a career.

At least, that is, until this winter, when the itch returned. Jennings was filming an instructional hitting video as part of his job with a strength and conditioning company and he suddenly rediscovered his love of the game. So off he headed to try out for the Nationals, and he was good enough to land a minor league gig at Double-A.

As teammate Chris Michalek said, “He came to camp in shape. It’s not like he was sitting around eating cheeseburgers and taking naps.” Oh, damn. So that’s what I’ve been doing wrong.

Jennings recorded a decent 790 OPS in 22 Double-A games before getting a promotion to Triple-A to replace the injured Larry Broadway. Even though he’s picked up the pace a bit lately with six RBI in the last 10 games, Jennings is only batting .230 through 30 games and 100 at-bats, so it’s not as if he’s putting himself on the map for a call up to the majors. While he offers some nice left-handed pop, Jennings struggles mightily against southpaws, and, in fact, he could very well be headed back to Double-A once Broadway returns. And that, perhaps, may again make him decide to call it a day.

Still, I find it more than just a little ironic that he’s outlived all the players that he was traded with or for. Gant is long gone; Walker looks to be finished after the A’s released him last month and Ochoa was cut from from the PaSox last month. Yet Jennings plays on.

By RotoRob
This entry was posted on Tuesday, June 5th, 2007 at 1:17 pm and is filed under BASEBALL, Player profile, RotoRob. You can follow any responses to this entry through the RSS 2.0 feed. You can skip to the end and leave a response. Pinging is currently not allowed.