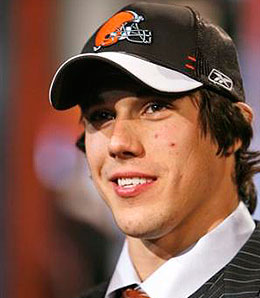 Just as they were on Draft Day, all eyes will be on new Cleveland Brown quarterback Brady Quinn this year. Just don’t expect him to be a fantasy stud from day one.

He sat there with that expression. You know, the one where things go completely wrong and unexpected. When you were a kid you probably dropped your fresh ice cream cone or the ground; or maybe you walked into a toy store and you realized that Teddy Ruxpin was sold out (an extremely dated reference, by the way). That was Brady Quinn. After not being selected at nine by the Dolphins which was considered the furthest possible drop for him, Quinn’s name was finally called at number 22 when Cleveland jumped back into the first round.

Quinn’s green room nightmare, which included a trip into a private room thanks to Mother Teresa…err, Roger Goodell, may have cost him millions of dollars, but he has an opportunity to start right away in Cleveland.

Not to go all Tony Robbins here, but Quinn going at 22 may work out for him in the long run. At number three, the Browns got tackle Joe Thomas which could pay dividends for Cleveland’s running game and, naturally, its pass protection. Essentially, by going at 22, Quinn’s chances to succeed may have improved depending on how quickly Thomas can help. If you’re the Browns, getting Quinn and Thomas sounds a heck of a lot better than just getting one of them.

While the offensive line stands to improve, a key to Quinn’s development will be the skill positions of wide receiver, tight end and running back. The star-crossed group featues two talented and loquacious players, Braylon Edwards and Kellen Winslow Jr.

While Edwards and Winslow continue to develop, the running game is still a question mark. The remains of Jamal Lewis will likely get the start. However, this isn’t the Lewis of yesteryear (the one not wearing the orange jumpsuit, by the way), and that will put pressure on whomever is playing quarterback.

Speaking of which, Quinn will have to beat out Charlie Frye for the starting quarterback spot, which shouldn’t be the most challenging thing in the world. The only question is how soon he can do it.

Teams often use the approach of having a veteran quarterback begin the season to teach their young quarterback as the schedule wears on (i.e., Kurt Warner–Matt Leinart, Kerry Collins–Vince Young). Cleveland does not have a seasoned veteran to teach Quinn (sorry, Frye and Ken Dorsey do not qualify), thus, how the Browns handle him will be very important.

Ultimately, Quinn’s work will be cut out for him for numerous reasons including the defenses in the AFC North. Playing Baltimore and Pittsburgh will not be easy. That’s just a small reason why he can’t obviously help your fantasy team this season. He’ll get a grip on things eventually, but with Cleveland’s horrible run of luck, Quinn will need just more than a good college pedigree to change the team’s fortunes.

Not only must Quinn cure the quarterback woes of Cleveland, he must overcome his own big game jitters — he was notoriously average in the Fighting Irish’s biggest games. If he doesn’t, another mistake by the lake will be in store for Browns’ fans. Well Cleveland, at least you have LeBron James and Daniel “Boobie” Gibson.

By Derek Jones
This entry was posted on Monday, June 4th, 2007 at 11:40 am and is filed under Derek Jones, Draft report, FOOTBALL. You can follow any responses to this entry through the RSS 2.0 feed. Both comments and pings are currently closed.