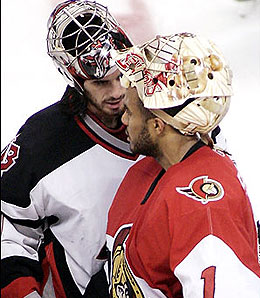 The Eastern Conference Finals could very well come down to Ray Emery, right, vs. Ryan Miller.

Many moons ago, the Buffalo Sabres and Ottawa Senators played a regular season game that wound up with multiple fights, a gajillion penalties, and smilin’ Ray Emery knocking the crap out of Martin Biron. Biron’s hiding over in Philadelphia now, but expect a playoff series of epic proportions between these two Eastern Conference heavyweights. The Senators have shed the image of the choking, soft team and are now ready and willing to play anyone. The Sabres have the best collection of talent in the league, but have played inconsistently throughout the playoffs. These two teams are so well matched, that it’ll essentially come down to a coin flip. Jason Spezza or Daniel Briere? Emery or Ryan Miller? On paper, the Sabres have more depth (Maxim Afinogenov, Tim Connolly, etc.), but they haven’t been functioning as a unit nearly as well as the Senators. That doesn’t mean that things can’t magically click for Lindy Ruff’s team, though. The question comes down to whether or not you believe in the team on a roll (Ottawa) or the team that looks better on paper (Buffalo).

Potential Goat: Doubts will continue to follow Emery until he defeats a playoff-tested contender.

Sleeper Pick: Joe Corvo’s playing much better than his regular season performance. Key stat — he’s almost got as many shots as Dany Heatley and Spezza.

For two series now, the Red Wings have played the role of top-seed underdog. Will things be any different in a battle against the Ducks? There’s two key differences here between the Ducks and the San Jose Sharks or Calgary Flames. The Flames didn’t have the skill nor the will (at least on the road) to advance. The Sharks had the skill, but only flickers of the will. This is an intriguing match up where many areas mirror each other — skill up front (Henrik Zetterberg and Pavel Datsyuk for the Wings, Teemu Selanne, Andy MacDonald and Corey Perry for the Ducks), a great shut-down guy (Kris Draper for Detroit and Sammy Pahlsson for Anaheim), and solid goaltending. However, for every weapon the Wings have, the Ducks have more in every position. Nicklas Lidstrom? The Ducks have two Norris candidates. Dominik Hasek? Hey, the Ducks could start back-up Ilya Bryzgalov and not miss a beat. When it comes to intangibles, the Wings seem to have found their swagger and the Ducks dish out punishment in a way that the Sharks simply couldn’t (or wouldn’t) do.

Potential Hero: If Lidstrom can prove that he’s better than two Norris candidates combined, then he really does deserve the trophy.

Potential Goat: I heard a rumor that Todd Bertuzzi was traded to Detroit but I don’t believe that’s true.

Sleeper Pick: Mikael Samuelsson was a key contributor in defeating the Sharks. Can he help take out another California team?

By Mike Chen
This entry was posted on Tuesday, May 8th, 2007 at 6:39 pm and is filed under HOCKEY, Ice Chips, Mike Chen. You can follow any responses to this entry through the RSS 2.0 feed. You can skip to the end and leave a response. Pinging is currently not allowed.