Red Sox Heap on the Humiliation for the Jays 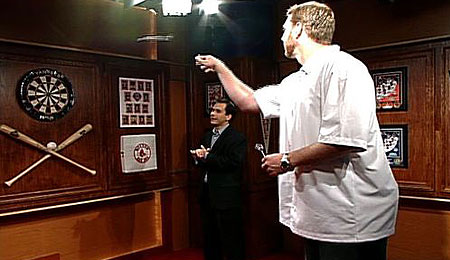 We were able to make it down to two of the three Red Sox-Jays games this week, and I have to admit to some confusion. I thought TBS only showed Braves’ games, but after witnessing this series I’m pretty damn sure I was watching TBS (as in the “Total Bitch Slapping” network). How else do you qualify such a sound thrashing? But I’m getting ahead of myself here. Let’s set the stage.

The Bosox came into the game comfortably in first place in the AL East, with half as many losses as the last-place Jays had accumulated. And of course, they had taken the first two games of this set by a combined 18-5 count. In going for the sweep, the Bosox’ opposing starter kept getting harder it seemed. First they were to take on Tomo Ohka, but he was moved up to face the music Wednesday, leaving Dustin McGowan to pitch the finale for the Jays. But that was switched and instead, Toronto sent its ace out in the form of Roy Halladay. Taking the third wasn’t going to be easy. Or maybe it was.

The Jays — in the midst of an eight-game losing skid (their worst in over five years) — desperately needed Doc to rebound from the shellacking he took in his previous outing. Saturday, Texas tagged Halladay for nine runs and a dozen hits (which tied the most he’s ever given up) in just 5 1/3 innings. If Toronto’s perennial Cy Young contender isn’t able to give the beleaguered bullpen a rest every five days, then this team is in real trouble.

Prior to that ugly start on the weekend, Halladay had been money, tossing quality starts in all six of his outings.

By RotoRob
Tags: Boston Red Sox
This entry was posted on Friday, May 11th, 2007 at 4:13 pm and is filed under BASEBALL, Event coverage, Game report, RotoRob. You can follow any responses to this entry through the RSS 2.0 feed. Both comments and pings are currently closed.