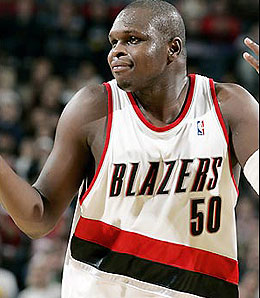 What? Doesn’t everybody need a lap dance in their darkest hour?

You know, things have been just a bit too quiet in Portland this year as the team works hard to shed itself of the Jail Blazers tag. Thank goodness for Zach Randolph. Off on bereavement leave, he not only gets spotted at a strip bar, but he bails out on his tab on the club. It’s completely understandable: “I’m so stricken with grief! The only thing that will comfort me is titties in my face.” Of course, the connection (it was his girlfriend’s cousin who died) was tenuous at best to begin with. The upshot? He won’t be starting when he returns to the team tomorrow. We report on this situation in today’s Daily Dose.

With Marcus Camby MIA, the Raps exploited Denver; ‘Zo’s still dealing with knee issues; Jameer Nelson is putting up some decent numbers of late; and Caron Butler won’t be returning ahead of schedule after all.

Once you’ve worn out your dog and it’s time for a break, come check out all our fantasy basketball coverage in the Daily Dose.

By RotoRob
Tags: NBA
This entry was posted on Saturday, March 24th, 2007 at 8:05 pm and is filed under BASKETBALL, NBA Daily Dose, RotoRob. You can follow any responses to this entry through the RSS 2.0 feed. Both comments and pings are currently closed.