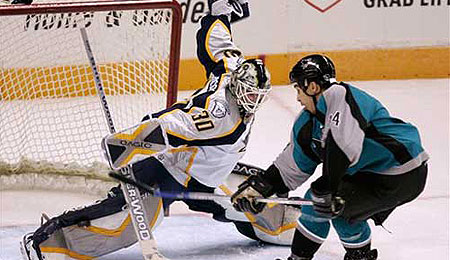 Jonathan Cheechoo has been unstoppable with five goals in two games.

Apparently, Joe Thornton’s not going to be giving up that Art Ross Trophy too easily. Thornton and Jonathan Cheechoo have finally found their groove again, and Thornton’s quickly creeping up on Sidney Crosby. Crosby’s still got a lead, but any sort of prolonged Crosby slump will allow Thornton an opportunity to repeat as scoring champ.

Todd Bertuzzi is back on the ice. His Red Wings debut was unremarkable, but that should be expected — the guy’s been out for three-quarters of the season so don’t look for him to fully get his legs for another 10 games or so. In other words, he shouldn’t finish the regular season with too many points, but the Wings got him for the playoffs anyways.

With Manny Fernandez out for the season, it’s all about Niklas Backstrom in Minnesota. Backstrom currently leads the NHL in save percentage and goals-against average. Bet you didn’t see that one coming!

Who will break 50 goals this season? Vincent Lecavalier is a dead lock; behind him, Teemu Selanne and Alexander Ovechkin are within striking distance but it could be difficult. Selanne’s been on a small hot streak with five goals in his last five games, but with just a handful of games to go, he will essentially have to go at a goal per game or better to get there. Ovechkin’s in the same boat; the problem is that Ovechkin doesn’t have the talent around him to help him out.

Cheechoo definitely won’t break 50 goals this season, but it looks like he’s on pace to finish with a respectable 35 or so. Considering he looked like he was headed for about 20 goals earlier in the season, that’s good news. Cheechoo shouldn’t feel too bad — Jarome Iginla had a similar dip after he won the Rocket Richard trophy.

With the final stretch of the season underway, we can take a look at some goofy stats of the season. Matthew Barnaby (39 games, 127 PIMs) and Ben Eager (55 games, 181 PIMs) are your top PIMs per game players. Olli Jokinen needs to make up 50+ shots in the next two weeks to catch up with Ovechkin for the overall shots lead. For a while, Derian Hatcher was on pace to be a whopping -100; unfortunately, that bit of entertainment fell by the wayside and Tampa’s Vaclav Prospal has the honor of having the league’s current worst +/- with -27.

Going into the season, the prognosticators penned Evgeni Malkin, Wojtek Wolski, Matt Carle and Phil Kessel as the frontrunners for the Calder. Malkin hasn’t disappointed, and Wolski and Carle have had reasonably good rookie campaigns. Kessel was obviously slowed by his bout with testicular cancer, so you’ve got to give him a pass for returning quickly and working as hard as he has; however, his 25 points in 61 games definitely didn’t come close to expectations.

Dominik Hasek’s notoriously kinda nuts, so when Mike Babcock called him out for flopping while trying to draw a penalty (and costing the Wings a goal), one has to wonder how that will sit with the enigmatic Dominator. Will it piss him off and make him a better goalie or will it piss him off and take him off his game? With Hasek, you can just never tell.

By Mike Chen
This entry was posted on Friday, March 23rd, 2007 at 6:01 pm and is filed under HOCKEY, Ice Chips, Mike Chen. You can follow any responses to this entry through the RSS 2.0 feed. You can skip to the end and leave a response. Pinging is currently not allowed.