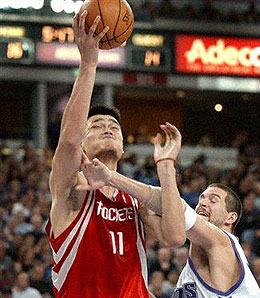 Should you dump Brad Miller, right, to get Ron Artest?

I always enjoy your Rotoworld articles.

Ron Artest was just dropped in my league. Do you think he’s worth grabbing if it means losing either R-Jeff, Brad Miller or Chris Kaman to make room?

Sounds like I should drop Kaman and gamble on Artest but it’d be great to hear your two cents.

I would drop Kaman to get Artest.

It seems like a pretty clear call to me from a fantasy standpoint. I mean if you’re seeking the all-personality team, perhaps Artest isn’t the right dude (mind you, until Kaman cut his hair, he sort of looked like something straight out of Deliverance). But personality isn’t a fantasy category yet. Dump Kaman.

What do you think of dropping Steve Blake (or someone else on the roster like Jerry Stackhouse) for Luke Ridnour?’Or what about Luke Walton?

The problem with Blake is outside of his consistent six assists per game, he will do little else for you. A.I. and ‘Melo handle the ball way too much for Blake to have a real fantasy impact. Stackhouse can be a difference maker if he is on that night.

Now, do you grab Ridnour? Too erratic for me. You never know what you are going to get with Ridnour. Walton has to deal with Kobe and his one-man game, but I think he is a better bet than Blake to be honest. I’d gamble on Walton and the Lakers over Ridnour and the Sonics.

Delonte West and LaMarcus Aldridge are available in my league. Should I drop Chris Kaman or Brad Miller to make room for either of them?

This is my first time playing fantasy basketball and unless my team has a complete meltdown, I should skate in with the final playoff spot. As a first timer I was looking for some playoff advice…

During the regular season, I generally tried to put a balanced lineup out there. We have seven active spots, so outside the normal five I would usually try to play a point and a big guy (usually Zach Randolph). I figured I put myself in a good spot for all categories that way, and it can give you some big 7-2, 8-1 wins…or losses.

In the playoffs, would I be better off scrapping the balanced approach and going all big or all small (depending on scheds, matchups, etc.)? I may punt a couple cats, but at the same time I think I would have a stronger chance of scraping a 5-4 win out.

I normally try to give a long enough answer to justify my answer and reason. But, there is one short.

Do what got you there!

If you made it to the playoffs by putting a balanced attack out there, keep it going. In any playoff style matchup you need to look at a few things:

1. Does you league allow for daily or weekly lineup changes? If daily, play the best player who is playing that day. If you can play them all…play them all! If the league only allows for weekly changes (meaning one lineup from Monday to Sunday), then you need to look at how many games they play in that given week and play the guys with the most games. Unless you have something like Kobe playing three and Steve Blake playing five, then I still ride Kobe and his one-man band game.

2. Again, if it is daily, and you are falling behind too much in a single category, scrap that category and play to win the others instead (this is assuming that all the slots are taken and you have guys on the bench who play that day too).

3. Don’t be afraid to pick up some FAs. Go for the hot guys sometimes. If you have some bench warmer that never plays for you anyway and he has been slumping in the NBA for the last three weeks or so, look at picking up the FA that has been hot over the last 10 games or so. Down the stretch, fatigue becomes a factor and the guys who saw fewer minutes all year start to see more and more minutes. Don’t bank on them, but don’t ignore them either.

4. If the lineup is full of guys playing tonight (still on daily transactions), play the best guy available. Look at matchups, but play the best available player.

If your league is weekly, you pretty much have to look at total games played for the week, quality of the players, and just set the most games played with the best players. Really simple. Daily transactions…play everyone that you can that day. If everyone plays, play the best player.

By James Morris
This entry was posted on Sunday, March 25th, 2007 at 12:59 am and is filed under BASKETBALL, Dear RotoRob, James Morris. You can follow any responses to this entry through the RSS 2.0 feed. You can leave a response, or trackback from your own site.