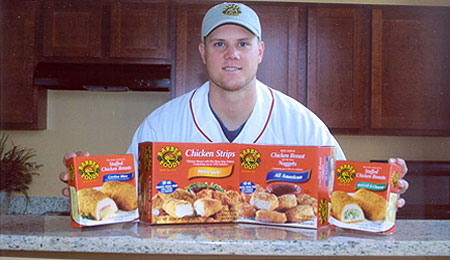 Let’s hope the new Bosox closer (whoever the hell he is) can flog opponents as well as former closer Jonathan Papelbon flogs chicken products.

After a very forgettable season which saw the team get off to a 59-36 start yet somehow only win 86 games, the Bosox faced another winter of change. Several new faces have emerged, not the least of them being the next great Japanese sensation, Daisuke Matsuzaka. Here’s hoping he’s no fat toad and that he can become a key cog in the Bosox machine as the team looks to get back to the postseason in 2007. In this week’s Offseason Lowdown, we preview the Boston Red Sox.

We’ve got all of this and more in this week’s Offseason Lowdown.

By RotoRob
This entry was posted on Friday, March 9th, 2007 at 10:22 pm and is filed under BASEBALL, Offseason Lowdown, RotoRob. You can follow any responses to this entry through the RSS 2.0 feed. You can leave a response, or trackback from your own site.