Breaking Down the Fantasy Baseball Draft 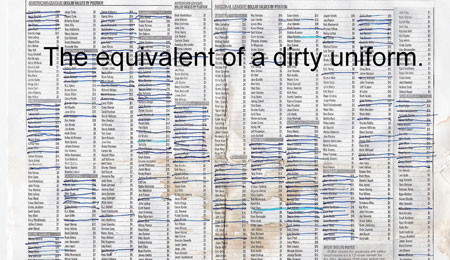 Here’s what James’ cheat sheets look like after a hard fought draft.

Fantasy baseball has already started and it is never too early to get a live draft going. I completed my first draft only minutes ago and saw some strange trends going on. Here is a breakdown of my picks and why I made them. The league has 16 teams, it is a snake style draft, and the scoring catagories are as follows:

I’ll go through the draft with the following format: Round, Pick No., Player, Position

Some knucklehead took Alfonso Soriano No. 1 overall, which left Albert Pujols to go second, and I gladly took Santana third. There is nothing like getting the majors’ best pitcher with the third pick in a draft. The goal here is a 2.75 ERA, 0.95 WHIP, 20 wins and 250 Ks.

Well, I was the first to take a catcher in the draft, but with 16 teams, if the run started and we were on pick four of a round, I could wind up starting Chris Iannetta and praying he is the sleeper we all talk about him being. Mauer had a great ’06 season, and could actually improve his power numbers to around 30 HRs at some point in his career. Here’s what I see for him this year: .315/.395/.495.

Okay, Brian Roberts is a top 50 fantasy player on my draft chart, so getting him at 62 was good for me. Once I saw Chase Utley and Robinson Cano go, I knew it was time to get Roberts before I ended up with Chone Figgins. My expectations: .290/.355/.430 with 33 stolen bases.

Lackey is underrated and I think he has the stuff to be a future Cy Young winner. He is like Brandon Webb in that he keeps the ball on the ground and out of the stands. Lackey had a great second half last season and I hope to see
around 185 Ks, 15 wins, 3.60 ERA, and a 1.30 WHIP. A top 10 SP in the fifth round (67th overall) is great value.

A bit of a run started in closers, so I had to burn two picks in a row to make sure I got enough saves to compete. Cordero couldn’t have been much worse in Texas, but that’s a hitter’s park anyway. However, after going to the Brewers, he converted 16 of 18 save chances with a 1.69 ERA after Derrick Turnbow imploded. I’m thinking Cordero could get me 35 saves with a 3.30 ERA.

Well, Ray is a high risk/high reward pick to me. He has the raw talent to be real good, he still needs to improve how lefties hit him and get his command more in order. Ray’s main problem is that he puts everything he’s got into every pitch he throws. This is a time when 110 per cent at all times can hurt you. I’m hoping for a 2.75 ERA with 35 saves out of him.

Okay, so the 3B ran came and I was left reaching on Teahen. I will say that will be in the OF around the All-Star break, but he will still qualify at third this season. He had a monster second half last season (947 OPS), and I look for him to carry that over into this season. A line of .290/.350/.490 isn’t asking too much…right?

I take my first outfielder at pick 131. Admittedly, I waited a bit longer than I should have. Francoeur should hit around .265/.330/.475, but that’s a big maybe. I waited too long and this is what I ended up with.

Now I am worried because my OF is horrible so far and things don’t look very good from what is left on the board. Taveras is going to do nothing with the stick, but his legs made me take him here. He can easily steal 55 bases if the Rockies turn him loose. But, he has no pop in the bat and strikes out way too much to start on most fantasy teams. A line of .265/.315/.340 with
55 SBs is a dream come true from him.

After the OF crisis, I decided to take a break from making my “Oh no” picks and took a guy here I think can be a real sleeper. Bush is an innings eater that attacks hitters. He has crazy control, a very solid K rate, and he could be just the third starter I am looking for. A line of 16 wins, 165 Ks, a 3.25 ERA, and a 1.10 WHIP sound good to me.

Making the transition from the pen to the rotation is hard for most to do, but Wainwright hasn’t allowed a hit in seven innings so far this spring. The risk here is that if Jason Isringhausen falls apart, Wainwright gets thrown
back into the CL role. I am banking on Izzy having one more season in the tank. I need to get 110 innings, 3.75 ERA, 1.30 WHIP, six wins and maybe 100 Ks from Wainwright. This pick was a reach, but the OF problem is still on my mind.

I looked over the OF left on the board in hopes of finding someone…anyone…that I could start and get some stats from. Hermida
caught my eye. His rookie season plagued with injury scared draftees away, but not me. He has a sweet stroke with the bat, power potential and awesome plate discipline — all the tools to bust out this season. I’m thinking that .280/.395/.475 is possible.

It just occurred to me, I don’t have a first baseman! Normally, that’s not an issue in a keeper league, but we’re not drafting a keeper squad. Oh no…OF all over again. Scroll…scroll…scroll…Overbay to the rescue. He had a great 2006 season and I bet he does it again. Overbay has reached his prime and is not a bad middle of the pack option at 1B. I’m expected .300/.375/.470.

Just in case Overbay doesn’t get it done, Gonzalez just may. Playing in PETCO hurts his power, but he does play half his games outside of San Diego. This is just a hope and pray pick. My hope is to see a line of .295/.375/.490 come September.

I just couldn’t wait any longer to take the 2007 AL Rookie of the Year. Unfortunately, Garza got one too many outs to quality for the award, but regardless, he has the attitude of an ace and the arm to back it up. Not quite a Francisco Liriano on any level, I will sure take a poor man’s Liriano at pick 254 of any draft! I see him getting 12 wins, 150 Ks, 3.95 ERA, and 1.20 WHIP.

Why did I take Burke, you’re wondering. Well, I’m wondering that myself. I’ve been reading and people think he could have a good season playing in the OF. This was just to get a guy to back up Roberts at 2B and hope for the best. I’m crossing my fingers for a season of .280/.350/.425.

And the OF problems just get worse. Jenkins and I both hope for a trade out of Milwaukee. He had an OPS of 1178 OPS last September. Okay, so I messed up drafting my outfield. I’m hoping Jenkins puts up a line of .275/.355/.460.

I don’t trust Brad Lidge, so I took his heir. Wheeler strikes people out enough to keep his ERA and WHIP looking good even if he is just a set-up guy. There isn’t much left in round 20, and Wheeler is a sleeper hopeful. My hope is a 2.60 ERA, 1.00 WHIP and maybe 10 saves.

When do you know a draft has ended? When Graffanino starts looking attractive. What can I say other than I needed someone to occupy some middle infield spots and I wasn’t happy over my OF problem. If he hits .270/.340/.380 in 280 ABs, that would be fine at pick 323.

So, when it is all said and done I walk away happy with my team, but know that the outfield is going to be my downfall. I waited too long to take an OFer and may just end up trading for one or picking up the hot FA after Week Two. Let this serve as a lesson to you all, grab at least one starter at each position before you take a second. Grabbing closers back-to-back in rounds six
and seven instead of taking an OFer in round seven may hurt me when all is said and done. Only time will tell, but Francoeur, Taveras, Hermida and Jenkins is never a good OF line-up.

By James Morris
This entry was posted on Friday, March 9th, 2007 at 9:17 pm and is filed under BASEBALL, Draft strategy, James Morris. You can follow any responses to this entry through the RSS 2.0 feed. You can skip to the end and leave a response. Pinging is currently not allowed.