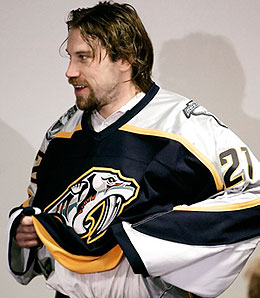 Peter Forsberg had barely been fitted for his Preds’ jersey before injury struck again.

Peter Forsberg’s out with an injury already. That’s too bad for fantasy owners because he was just hitting his groove with Paul Kariya and Martin Erat. Still, Forsberg says that the injury isn’t related to any of the serious ones he’s had in the past season and he shouldn’t be out too much longer.

Speaking of the Predators, they’ve welcomed Jason Arnott and David Legwand back to the ice. The line shuffling continues — last game, Legwand took Forsberg’s place on the Kariya/Erat line.

Shootout goals don’t count, otherwise Sidney Crosby would have eclipsed the 100-point mark already. As it stands, his mini-slump is making my prediction of 100 points by the first week of March look bad.

When it comes to ex-St. Louis Blues, Keith Tkachuk is having a better go of it than Bill Guerin. Tkachuk has two goals and an assist in five games with the Thrashers while Guerin has no points. Tkachuk’s Thrashers are in the middle of a five-game win streak while Guerin’s Sharks just recently snapped out of a funk.

Speaking of the Sharks, Patrick Marleau has returned to the lineup but is obviously not 100 per cent yet. The current configuration has Marleau on the wing with rookie Joe Pavelski and Guerin. Of the three, however, only Pavelski has registered points in the past few games.

The Florida Panthers have crept back into playoff contention on the creaky old back of Ed Belfour. Belfour’s won four of his last five starts against some tough foes (Atlanta, Tampa Bay and Dallas). With Alex Auld out and the Panthers on the edge of eighth place, look for Belfour to get the bulk of starts for the stretch run.

The line on Gary Roberts as a Pittsburgh Penguins: two goals, two assists, -2, and nine PIMs. Not too bad for an old guy. As for Georges Laraque, he’s not showing up in the box score, even in the PIMs column. What gives, Georges?

Chris Pronger’s out two weeks with a broken toe. The Ducks’ record when either Pronger or Scott Niedermayer are out hovers around the .500 mark; however, Anaheim’s got a light schedule coming up with Edmonton, Columbus, Chicago and LA all on the horizon, so don’t look for Jean-Sebastian Giguere to take too much of a hit.

Look who’s a good fit on the island — Marc-Andre Bergeron’s been a good pickup for the Islanders power play. In eight games, he’s got two goals and six assists, and half of his points have come with the man advantage. With the return of Alexei Yashin and the acclimation of Ryan Smyth, Bergeron’s power play totals should only increase.

If only they counted suspension time for PIMs, Chris Simon would be one of the top fantasy players available. As it stands, don’t expect to see Mr. Simon for a long, long time. I’m guessing he won’t even get any taste of playoff action.

By Mike Chen
This entry was posted on Friday, March 9th, 2007 at 11:03 pm and is filed under HOCKEY, Ice Chips, Mike Chen. You can follow any responses to this entry through the RSS 2.0 feed. You can leave a response, or trackback from your own site.