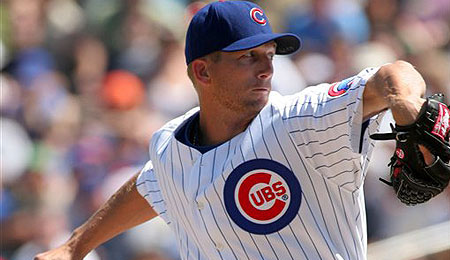 Wade Miller has a golden opportunity to be a useful fantasy starter thanks to Mark Prior’s inability to stick with the Cubs.

For the fourth straight season, Mark Prior won’t be breaking camp with Cubbies. This time, it’s opened the door for Wade Miller to make hay as Chicago’s fifth starter. In the final Offseason Lowdown of the season, we examine several other late-breaking situations that have allowed some unexpected players to have potential value early this season.

C.C. Sabathia insists he’ll take the mound Monday, leaving a possible Adam Miller arrival a bit premature for now; Scott Hairston will get a chance to prove he belongs with Carlos Quentin out; and one-time stud prospect Joe Borchard should get plenty of ABs in April.

Once you figure out how to tackle step No. 17 in the following trip plan, check in on this week’s Offseason Lowdown for plenty more fantasy baseball blurbs to help you get your 2007 season off on the right foot.

Offseason Lowdown: Do Yanks Have the Arms?

In just two years, Chien-Ming Wang has progressed from dressing like a cheerleader to being the likely Opening Day starter for the Yanks. The problems with Andy’s Not-so-Dandy back earlier this week made me wonder if the Yankees could survive a major hit to their starting rotation. So in this week’s Offseason Lowdown, we put […]

Tony La Russa may have to reach for the Pepto-Bismol a little early this year. It sure didn’t take long for the St. Louis Cardinals to hit their first bump in the road on their quest to defend their World Series title. Manager Tony La Russa is expecting to begin the season without two-thirds of […]

By RotoRob
Posted in BASEBALL, Offseason Lowdown, RotoRob | No Comments »

Let’s hope the new Bosox closer (whoever the hell he is) can flog opponents as well as former closer Jonathan Papelbon flogs chicken products. After a very forgettable season which saw the team get off to a 59-36 start yet somehow only win 86 games, the Bosox faced another winter of change. Several new faces […]

By RotoRob
Posted in BASEBALL, Offseason Lowdown, RotoRob | No Comments »

Offseason Lowdown: Rangers on the Rebound

Gerald Laird not only provides the Rangers with a better bat at catcher, but he’s also one of the best in the game at gunning down would-be basestealers. Will firing Buck Showalter have the same effect on the Rangers that it did for the Yanks and D-Backs (namely, winning the World Series)? At this point, […]