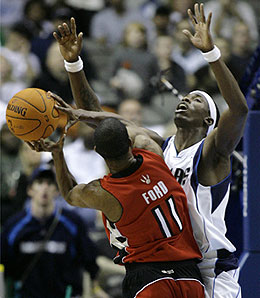 Josh Howard is getting angry about the lack of respect from opponents lately.

Does Josh Howard have a right to be pissed? He says he’s suffered ankle injuries on five occasions this year because players are intentionally undercutting him on his jump shots. Last night it happened again, and we check in on the situation in today’s Daily Dose.

T-Mac is human after all; Samuel Dalembert was a stud; and Zaza Pachulia showed off his nice touch.

If you can tear yourself away from chatting about the Oscars for a moment (of course, RotoRob gives out its own Oscars of sorts, complete with its own statue), we’ll fill you in on all the fantasy basketball news from the night that was in today’s Daily Dose.

By RotoRob
This entry was posted on Tuesday, February 27th, 2007 at 4:34 pm and is filed under BASKETBALL, NBA Daily Dose, RotoRob. You can follow any responses to this entry through the RSS 2.0 feed. You can leave a response, or trackback from your own site.