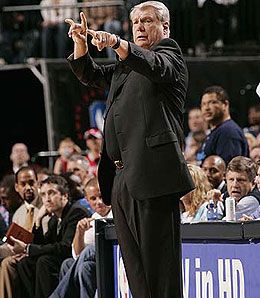 Remember when the Raptors were going to be Phoenix East and jack up 100 shots per game? Well, after a 2-8 start, the team realized that it was easier said than done, so it decided maybe it ought to focus on playing some D, and we’ve all seen the results. Unfortunately, Golden State hasn’t learned that lesson yet. That’s why a Warriors’ squad that is scoring more than any team not nicknamed the Suns has no peer when it comes to surrendering points. And that is looking very much like a recipe for a 13th straight season out of the playoff mix. In this week’s Position Battles, we take a closer look at Don Nelson’s team.

We also check in on Rashad McCants, slowly recovering from surgery and poised to play a more important role off the T-Wolves’ bench down the stretch.

We’ve got a whack more fantasy basketball related issues to unveil is this week’s Position Battles.

By RotoRob
This entry was posted on Wednesday, February 28th, 2007 at 5:25 pm and is filed under BASKETBALL, Position Battles, RotoRob. You can follow any responses to this entry through the RSS 2.0 feed. You can leave a response, or trackback from your own site.