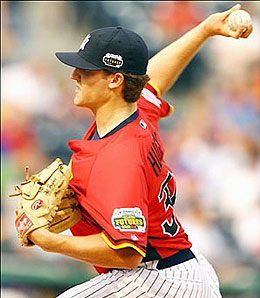 Just because you’re lucky enough to own uber prospect Philip Hughes doesn’t mean you should deal away Felix Hernandez.

Dear RotoRob.com,
‘
Hey man – here’s another keeper league question for you.’
‘
With guys like Philip Hughes and Homer Bailey on the horizon, would you trade away Felix Hernandez for Delmon Young?
‘
James.

It really depends on what your OF and SP look like. Hughes and Bailey haven’t done anything yet in the big leagues. Felix, meanwhile, is currently on the big league roster and doesn’t have to earn his spot this spring. Young looks like the next big OF, but King Felix will be huge too.

What it breaks down to is how strong your staff is without Hernandez. Hughes has to earn his spot in the rotation and the Yankees don’t even trust him as of yet to hand him a spot out of spring training. Both Hughes and Bailey have to still prove they can baffle the big league talent the way they baffled the Class-A and Double-A hitters. Not yet pitching in Triple-A could be a hurdle for them to overcome. Come back and let us know who your others starting pitchers are before you deal off your future ace for your future clean-up
hitter.

I enjoyed your article about my team, the Nationals, but want to bring to our attention a small factual error in your comments.

Thanks for the note, much appreciated.

Last year was the second season? Hmmm, I got my info here.

It shows them as the Washington Nationals in 2004, which means last year would have been their third season. I guess I should have checked elsewhere as well, but usually ESPN is so dependable.

Well, thanks for bringing that to my attention and I sure hope 2007 isn’t as long as I think it will be for you guys.

A guy in my league offered me Orlando Hudson and J.D. Drew or Bill Hall for a second draft pick. I’m in a keeper league. I guess it would be a great trade for me. I need a 2B and a third outfielder for my draft.

I think Drew and Hudson for a second round pick is fair, depending on how many teams are in your league and the number each team is allowed to keep. Brewers manager Ned Yost said that he plans to use Hall in centre field at the beginning of the season. While Hall will qualify at SS this season, he may start to play in the OF exclusively, thus dropping infield eligibility. And in shifting to a new position, Hall could very well struggle with the stick this year. Hudson, on the other hand, will hit around .280/.350/.430.

Drew is older and an injury concern. But, when he is in the game he is a threat with the bat. Hudson has improved his hitting each of the last three seasons and should do the same in 2007. Hudson has very good range at 2B and Hall is being moved out of the 2B position. Take Drew and Hudson and hope Drew can stay healthy.

Which player to keep: Aaron Harang or Robinson Cano?

What do you say?

I am a big pitching guy myself, but finding a 2B that can hit in the .325/.350/.500 range is about the hardest thing to do in fantasy sports. All things equal, I have to keep Cano, since 2B traditionally isn’t a position that has many quality hitters.

By RotoRob
This entry was posted on Tuesday, February 27th, 2007 at 3:28 pm and is filed under BASEBALL, Dear RotoRob, RotoRob. You can follow any responses to this entry through the RSS 2.0 feed. You can leave a response, or trackback from your own site.