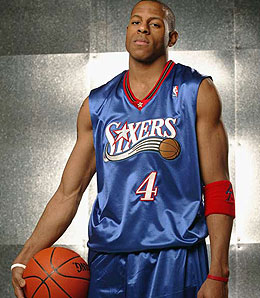 As solid as Iggy has looked lately, no way can you turn down an offer of CB4 for him.

The guy in my league that’s after Andre Iguodala is offering Chris Bosh. I really don’t have a great set of PG and Iggy is probably my best PG prospect even though he isn’t a true PG. I am not sure if he will hold it up for a whole year or even next year, but if he could keep it at six assists then he would be great as a part-time PG. Now
Bosh is a nice up and coming PF/C. My only really good big is Pau Gasol. Andrew Bogut is nice, but he is still learning. LaMarcus Aldridge and Tyrus Thomas are up and comers, but also need some seasoning.

One guy said he would trade me Chris Paul for the first pick in our upcoming rookie draft so for the No. 1 pick and Iggy I could get Bosh and Paul. The only thing I don’t like about Paul is he doesn’t shoot threes. Of course he is young and most certainly could start shooting them at some point. I guess my dilemma is should I keep Iggy and my No. 1 pick (possibly Greg Oden or Kevin Durant) or trade them and get Bosh and Paul? My PG prospects are Stephon Marbury, Delonte West, Luke Ridnour and Randy Foye. Slim pickings right now. I really think maybe Iggy has reached his ceiling and when Philly gets another proven scorer his numbers might go down. What are you thoughts on this?

If Andre Iguodala is your best option at PG, then I would have to say that you have some issues there. The 76ers are rebuilding now without Allen Iverson, so Iguodala will play a role for the team the rest of this season and probably next. He has been playing well in February (22 PPG, 9.2 APG, 7.5 RPG, 1.3 SPG, 0.7 BPG), but don’t take that as a sign of how good he really is. I think that what you see with him is what you get, between 15 to 20 points per game, five boards, and five assists. Chris Bosh on the other hand is here…there is nothing up and coming about him. He average a double-double (23.3 points and
10.7 boards), and sprinkles in a few blocks. Chris Paul is always good for double-digit assist numbers, and he also gets you nearly two steals per game. You can always get a J.R. Smith or Kyle Korver to pad those 3 point numbers if you really have to have them.

So, here is what I think you should do: if you have the No. 1 or 2 pick in the draft for certain, I keep that and take Oden or Durant. However, if you can’t lock in the No. 1/2 pick, I offer the pick to the league and see if I can do better than Paul. I pull the trigger on Iguodala for Bosh now though. If Andre Miller ever starts to take control like he did in Denver a few years ago, Iguodala will certainly see his numbers fall. Bosh is the man in Toronto and that’s not going to change. Pau Gasol has had to deal with injuries and doesn’t seem to be all that happy anymore. Bogut is okay, but don’t expect too much there. You have to separate yourself from the NBA player and the fantasy numbers. I take Bosh; keep the pick if it is Oden/Durant. If not, I see what I can get from the league for the pick.

Most of the time I say no to two-for-one deals. The guy is normally offering you two lesser players for your one stud player. However, this is not one of those times.

You get 44 points per game, 20 boards a game, 12 assists per game, 1.5 steals, and 2.5 blocks to Garnett’s 23 points, 13 boards, 4 assists, 1 steal, and 2 blocks. I would take the deal and laugh at the guy taking a hit in stats just to get a bigger name player. Amare will get better down the stretch run and so will Bosh really. KG is great, but in this case, one superstar isn’t as good as two stars.

By RotoRob
Tags: Andre Iguodala
This entry was posted on Monday, February 26th, 2007 at 11:20 pm and is filed under BASKETBALL, Dear RotoRob, RotoRob. You can follow any responses to this entry through the RSS 2.0 feed. Both comments and pings are currently closed.