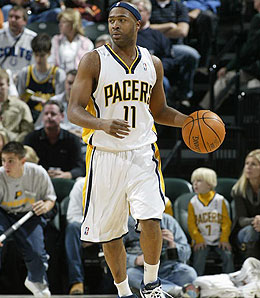 Is it possible a sympathizing strip joint club manager has dumped Jamaal Tinsley in your fantasy league?

Readers of Dear RotoRob, please take note that starting with the next installment of Dear RotoRob.com, your questions will now be addressed by the latest Fantasy sports guru to join our team, James Morris.

Jamaal Tinsley was mysteriously dropped in my league and is now on waivers. I want to pick him up, but I am at a loss as to who I should drop: Dikembe Mutombo or Chris Kaman?

Perhaps there’s nothing mysterious about it. Maybe the owner that dropped Tinsley is simply a strip joint club manager who can’t stand the idea of owning the Pacer guard anymore.

At any rate, I’d set the old guy adrift here. As well as Mutombo has played (as he’s surprised the hell out of me), his days are numbered. Kaman is sick right now, but he looked like he was coming around before the break.

The former mountain man is your guy down the stretch.

I just got offered Steve Blake for Kyle Korver. I have Korver and I need assists. Do you think it’s worth it and will Blake continue his assists with Allen Iverson back? I would really appreciate it if you could shoot me an answer. Thanks a lot.

No way’don’t make this deal. Blake was on a nice streak there, but it looks like Denver wants Iverson to be the main ball handler for the first unit, thereby negating much of Blake’s value. With so many teams desperate for a 3-point gunner, you can do so much better for Korver. If assists is what you’re after, I’d try to offer up Korver for Delonte West. That would be a pretty good deal for you.

By RotoRob
This entry was posted on Monday, February 26th, 2007 at 3:24 pm and is filed under BASKETBALL, Dear RotoRob, RotoRob. You can follow any responses to this entry through the RSS 2.0 feed. You can leave a response, or trackback from your own site.