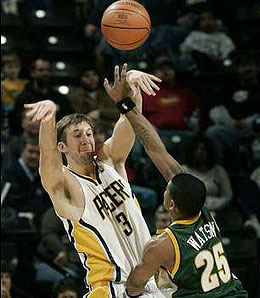 Troy Murphy has been more productive since joining the Pacers.

I’m in a 10-team league that starts three guards, three forwards, two centres, and two utility spots. Could you rank the following free agents in a league setup that places a great deal of importance on the centre position?

Jason Kapono (he’ll be an especially hot pickup after that performance in the 3-point competition and is expected to get more touches with Dwyane Wade out); Delonte West (really picking up his outside shooting and is as steady as they come right now; safest pick on the list); Jose Calderon (his value is fantastic right now, but will slip as Ford takes more and more of the minutes down the stretch); Chris Kaman (playing much better lately); Troy Murphy (virtually interchangeable with Kaman in terms of value); Rajon Rondo (besides Kapono, he’s the hottest of this list, but I’m not sure what Boston plans to do in terms of its PT situation, otherwise, I’d move him up higher on the list).

Hey again, Rob. Since I e-mailed you last week, I’ve dropped Reggie Evans for P.J. Brown, rescinded the Mike Bibby–Chris Wilcox offer and have the following offer to contemplate:

(If I do this, I was thinking of a counter-offer for Earl Watson instead of Calderon due to the schedules.)

My potential trading partner is in need at the C position (third place, his lineup also includes Rashard Lewis, Jamal Crawford, Anthony Parker, Jason Kidd, Outlaw, Miller, Andrew Bogut, Erick Dampier, Rodney Carney), but I would be loaded with guards as a result and hurting at the PF/C in the short term with Carlos Boozer out (and would likely try a further trade with someone else). Any thoughts/ideas?

Assuming this deal is still on the table, I’d go for it. Despite the fact it may leave you short of big men, the gains are too plentiful not to pull the trigger. Like you suggested yourself, this could be step one in a two-step process where you’ll take some of your smaller men and beef up at the four and five positions with another team. At this point, assessing the overall value of the deal is the key, and you win it, especially in steals, but also with minor gains in many categories that will add up.

Glad you liked the Raptors’ coverage. I wish I had more time to do game reports, but it’s a constant juggling act. As for the inferiority complex, why? The only things we’re missing are more handguns, a healthcare system that only the wealthy can afford and a trillion dollar defense budget.

Okay, so I don’t have a trade question this time, but what I should do with my team? I wanted to pick up Randy Foye, but I don’t know who I should drop. I was thinking Andrew Bogut as he looks to be my weakest player. I have Paul Millsap but I don’t want to drop him at this point. But I also have Baron Davis, Antawn Jamison and Yao Ming on my bench with injuries. I hate to drop such good players like them. Oh yeah, I am way ahead in blocks and rebounds so I think Bogut would be the best guy to drop. What is your take on it? I am also trying to move BD before anybody in my league figures out that he will most likely be out for three weeks, and I am asking for Michael Redd which I don’t think will go through, but it’s worth a try. If that doesn’t work I am going to ask for Richard Hamilton. Now is that asking too much for an injured BD?

Thanks once again, Rob.

If you’re way ahead in blocks and boards, dumping Millsap for Foye is a good move, assuming you’ll be okay in FG percentage, that is.

No trade question? Hmmm…sure sounds like one. Anyways: As far as trading B Diddy, I doubt you’ll be able to (or for that matter, I’m not sure why you’d want to) try to deal him away under false pretenses. I doubt you’d be able to get Redd, but like you said, you can try. Asking for Hamilton seems much more reasonable. I think you might have better luck with that offer.

I read The Daily Dose on Rotoworld all the time and it helps me tremendously. Thanks!

Someone wants to trade me Andre Iguodala for Chauncey Billups. I’m hesitant to get rid of Billups, but I see tremendous upside in Andre.

Glad you dig the Dose.

As for your deal, of course dealing Billups is tough to swallow, but I’m also convinced that Iggy is poised to be a top 20, maybe even top 15 player for the rest of the season.

The key here for you is making sure you can survive the hit in 3-pointers. Beyond that, I like this move and give it my blessing.

Given the choice, who would you rather have on your fantasy team the rest of’the way — Lamar Odom or Rashard Lewis? I need to make a decision on a trade pretty quick and I need feedback, as this one is driving me nuts
‘
Thanks.

I’d go with Lewis. The advantages in 3-pointers and FT percentage are just too heavy to overlook. Odom hasn’t been quite himself and I’m hearing that he’s not yet 100 percent since returning from his knee injury and that he won’t be for a couple of weeks still.

Do you guys cover potential trades?

I need more 3s and assists without murdering my FG percentage. Should I wait it out, or trade him, and if so, for who?

If you mean RotoWorld, we don’t cover trades per se, but I can try to help you.

I don’t blame you for getting frustrated as a Bibby owner. Just when it looked like he was turning the corner, he goes back into the tank.

I’m hearing that Cleveland is big on Bibby, but the Kings are playing it coy here if they do intend to deal him. [The trade deadline has come and gone and Bibby is still a King.]

Players to target given your circumstances include:

By RotoRob
This entry was posted on Friday, February 23rd, 2007 at 8:55 pm and is filed under BASKETBALL, Dear RotoRob, RotoRob. You can follow any responses to this entry through the RSS 2.0 feed. You can skip to the end and leave a response. Pinging is currently not allowed.