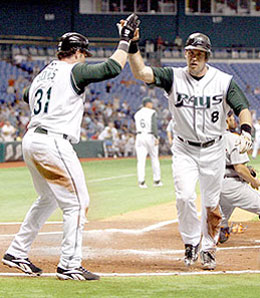 In 2007, 106 players filed for salary arbitration, the largest number since 1993. Before players and clubs exchanged figures on January 16, 50 of these players had agreed to contracts with their clubs. Of the remaining 56 players, only seven actually went to an arbitration hearing. In four of the hearings, the arbitrators sided with the clubs (Tampa Bay-Josh Paul, Los Angeles Dodgers-Joe Beimel, Florida-Kevin Gregg and Washington-John Patterson). In the others (Florida-Miguel Cabrera, Washington-Chad Cordero and San Diego-Todd Walker), the arbitrators chose the player’s figure. It was the 11th straight year that the majority of the decisions went in favor of the clubs. Since the first hearings were held in 1974, the clubs have won on 273 occasions and the players have prevailed 203 times.

By my count, here is the breakdown of the 49 cases that settled after figures were exchanged, but before the scheduled hearing:

There are two situations where arbitration can come into play. By far the most common is the one involving players under control of their clubs, with three to six years of major league service (MLS), plus the 17 per cent most senior MLS-2 players, referred to as ‘super twos.’ Of the 106 players who filed this year, 104 fell under these categories.

The other situation involves free agents. When a player with six or more years of major league service files for free agency, his club has the option of offering arbitration. A club must offer arbitration in order to get compensation in the form of draft picks if the player signs with another club. If the player accepts arbitration, he is no longer considered a free agent and he becomes bound to that club. If a player refuses arbitration, as most players do, he is a free agent who can sign with any club including the one he played for last year. The two free agents who accepted arbitration this year were Tony Graffanino of Milwaukee and Todd Walker of San Diego. When Walker’s case went to a hearing on February 20, it was the first time since 1991 that a potential free agent went to a hearing.

The arbitration process is designed to promote a settlement at a salary in line with that of other players with comparable performance and service time. The results this year continue to indicate that the process is working as intended. Players eligible for arbitration for the first time receive a large increase in salary since they have no leverage in their pre-arbitration years when their salaries are under control of the clubs. Players who have been through the process before also generally receive salary increases depending on their performance in the preceding year. Two arbitration-eligible players, Mark Prior of the Chicago Cubs and Jody Gerut of the Pittsburgh Pirates, received slightly lower base salaries than their 2006 salaries. Both had injury problems in 2006.

Players that settle prior to hearings are frequently able to include performance bonuses, based on playing time, and awards bonuses in their contracts. Both Prior and Gerut have such bonuses which could enable them to earn more than they did in 2006.

The big winners in the arbitration process this year were Chase Utley and Carlos Zambrano. Utley signed a seven-year contract for $85 million as the Phillies bought out his two remaining arbitration years and five years of free agency. Zambrano signed the biggest one-year contract ($12.4 million), although it was below the mid-point of the filings in the case.

Bill Gilbert writes on a variety of baseball-related topics and is a frequent contributor to RotoRob.com.

By RotoRob
This entry was posted on Friday, February 23rd, 2007 at 11:04 pm and is filed under BASEBALL, RotoRob, RotoRob correspondent report. You can follow any responses to this entry through the RSS 2.0 feed. You can leave a response, or trackback from your own site.