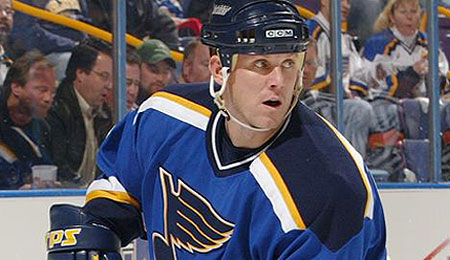 Keith Tkachuk will likely be taking his 20 goals elsewhere next week, with Atlanta looking like the best bet to secure the veteran’s services.

Only a few days remain before the trade deadline. If you like to gamble, it might be worth your while to pick up some fringe veterans who may have new homes in a few days. Keith Tkachuk, Doug Weight and Bill Guerin will almost certainly be moved; players like Jeremy Roenick haven’t done much this season but may get a little extra burst just by having that one last chance at the Cup.

Peter Forsberg’s found a new home in Nashville with linemates Paul Kariya and Martin Erat. While the trio has created plenty of scoring chances with slick passes, they’ve failed to connect in Forsberg’s three games so far. He’ll get the points sooner rather than later; a guy with Forsberg’s passing sense and dedicated work ethic doesn’t just fall off the chart. Still, don’t be surprised if Barry Trotz tries some new line combos to see if he can get something that clicks.

In Dallas, Ladislav Nagy’s been playing on a line with Mike Modano and Jere Lehtonen. Brought in to bolster the Stars’ anemic offense, Nagy hasn’t done anything in three games. Right now, out-of-playoff-contention Phoenix is looking pretty smart for dumping Nagy for a first rounder.

Anson Carter just got dealt to the Carolina Hurricanes Friday morning. He should do better than his tenure in Columbus simply because of the talent level around him. In the short term, he’ll fill in for the injured Erik Cole. However, Carter has been one of the most inconsistent players in the league over the past five years or so, so his results will be a crapshoot.

Sidney Crosby’s within striking distance of 100 points. Look for him to break that barrier before the end of February.

There’s a small push to nominate Henrik Zetterberg for the Hart Trophy as league MVP. Zetterberg’s had a ridiculously good February with 23 points in just nine games so far; however, it takes an awe-inspiring season from beginning to end to get a Hart Trophy, so don’t expect Zetterberg to be accepting the award come June.

The goalie rotation continues in San Jose. Evgeni Nabokov was out with an injury for a few games and Vesa Toskala got shellacked without any help from his forwards. Then Toskala got the flu bug and Nabokov won two straight. We’ll see if these two will still be rotating on Wednesday, the day after the trade deadline.

Speaking of the Sharks, the anticipated return of shifty Alex Korolyuk has been derailed as he decided to stay in Russia. Instead, the Sharks will look to the return of Steve Bernier and Joe Pavelski from injury to get their team going again.

A number of things are going wrong in Atlanta right now and Kari Lehtonen’s performance isn’t helping. With a February goals-against of around 4.00, Lehtonen is in the biggest slump of his young career. Of course, Lehtonen’s performance may change if the Thrashers get a veteran defenseman and some secondary scoring at the trade deadline.

The Sabres are decimated by injuries right now, most notably Maxim Afinogenov, Paul Gaustad and Ales Kotalik. Tim Connolly’s return from a concussion has been slowed by a leg injury, but Conolly may be able to get in the lineup in the next one-to-two weeks. With Kotalik, Gaustad and Afinogenov out, Connolly will get a chance to contribute right away whenever he gets back on the ice.

Ray Emery’s back from his suspension but the Sens did just fine without him. In fact, early-season goat Martin Gerber’s actually put together a six-game win streak and finally got his save percentage over .900. Does that mean there’s a goalie controversy brewing in Ottawa? Or will Gerber simply get beat down in a street fight by Emery (dig the maniacal grin Emery had in his brawl with Martin Biron)?

Brendan Shanahan’s going to be out for a bit after that nasty collision with Mike Knuble (who’s out a month himself). With Jaromir Jagr playing with bumps and bruises, the New York Rangers other depth players will have to step up. Most notably, it sure would help if the Petr Prucha of last season returned. With Shanny sidelined, Prucha will get all of the opportunities in the world to do so.

By Mike Chen
This entry was posted on Friday, February 23rd, 2007 at 6:33 pm and is filed under HOCKEY, Ice Chips, Mike Chen. You can follow any responses to this entry through the RSS 2.0 feed. You can skip to the end and leave a response. Pinging is currently not allowed.