Dear RotoRob: Will Bonzi Have Value? 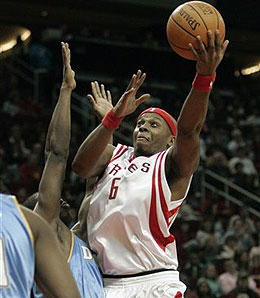 Bonzi Wells makes an intriguing fantasy pickup because of his potential upside.

Hi. I am in a 10-team, eight-category rotisserie league.

All of these players are available on my waiver wire. Can you rank the players for me in terms of who has the best value to the worst value?

Do you think Bonzi will have good value the rest of the way?

Ranking just based on what you need, I’d go:

Based on my expected overall value for the rest of the year:

Obviously, there are several caveats here.

Jefferson is the rebounding king and will help you in blocks, but if you need steals, forget it. Check on how severe his ankle injury was from Wednesday before committing to him, however. This late-breaking news could affect my rankings here.

Villanueva is a big if because of the injury situation; how risky do you feel? His FG percentage is the best of the lot, but if you need assists, find someone else.

Foye has great upside, and I expect him to be more consistent in the second half. He’s a good FT shooter, but isn’t scoring enough to be very valuable right now. Check out what I said about him after he was drafted.

Wells is the most intriguing of the four, because he’s playing the furthest under his capabilities. He’s not playing enough or scoring enough to be useful right now, but is capable of fantastic block and steal numbers, which makes him so valuable as a guard. I have been waiting for him to explode, but he’s such an enigma as well. So file this one under the risk category as well.

Bottom line: take Jefferson as he’s the most valuable of the four. I know he’s not the best bet for what you’re looking for, but maybe you can trade him for someone who can help you a bit more in those areas (like Gerald Wallace?).

Thanks for answering my previous question, which related to dropping Rashard Lewis and Yao Ming. Well now it appears Yao won’t be ready until mid to late March, which is when my fantasy playoffs start. I’m in second place still despite losing those two guys because I’ve lucked out on the waiver wire. Should Yao be held onto at this point? I realize he could be helpful come fantasy playoff time, but I am not sure how effective he could be. My current centres are Chris Kaman, Samuel Dalembert and Dikembe Mutombo. Any advice is greatly appreciated.

Unless you can land a better centre on the waiver wire (very doubtful) or via a trade than you currently have, you should hold on to him. Yao has shown an ability to come back strong from injuries in the past, so it wouldn’t shock me if it didn’t take him much time to regain his game. Besides, Mutombo won’t be of any use to you when Yao gets back anyways, so you may as well have a replacement for him.

Hold the line unless you can engineer a deal for someone a bit better like Andris Biedrins or a top centre like Jermaine O’Neal or Marcus Camby.

Hello. Kudos on your guys’ work with your site — your info is invaluable with helping me stay ahead/keep up with the cutthroat competition in my league…

Hey, it’s been a while since we’ve heard anything — any updates on Speedy Claxton? If I wasn’t so dire for assists (and he wasn’t a fellow Hofstra alum, and if I didn’t draft him in the ninth round of my draft), I would have dropped him a very long time ago!

Any input/insight you might have would be tremendously appreciated.

Thanks for the support, man.

Ha ha…got stuck with a fellow alum, did ya? Well, if you went to school with him, you should know better than most that Claxton is among the most infuriatingly injury prone players on the planet.

But fear not. He’s coming back next week, so get ready to activate him for a two games before his next knee issue.

So, Al Harrington, Troy Murphy and Mike Dunleavy are available in my shallowest of shallow leagues’are they worth a pick up and if so, who do I dump?

Now that Shaquille O’Neal is back, do I dump ‘Zo?’ I still need blocks so not sure why I should but I guess if he’s not going to play, he’d be the only guy I could really cut. I need FG%, 3s, assists, blocks, steals with low TOs and no techs, though won’t they treat Shaq with kid gloves for awhile, leaving ‘Zo to get plenty of time? If it’s not ‘Zo, is it Battier? Kaman? Artest? Or do I make a trade?

I don’t like Dunleavy as far as helping you in the cats you need. Harrington would be a great pickup for 3s and I think he’ll take off away from the stodgy Indy system. Murphy will help you in blocks somewhat, but I can’t see him being better than anyone you have.

My advice: dump Kaman and pick up Harrington.

Don’t dump ‘Zo yet — Shaq ain’t anywhere near ready to take over fully yet.

I’d prefer Shaq over Murphy, and if you want a guard instead, get Mo Williams and stash him. Again, dump Kaman.

What’s your take on Troy Murphy in Indy? Drop David West for him?

I think Murphy could be a double-double man in Indy possibly, but if you’ve been hanging on to West all this time, now’s not the time to drop him considering he’s back.

There’s not a thing Murphy can do better than West. You need to reap the reward of your patience in West.

Thanks for advice on the Antawn Jamison and Tim Duncan deal. Now that I gave away Duncan for Jamison I am left with the following.

I am currently in third place in a 10-Player Roto league.

Two questions: what are the weaknesses I can fix in my team or is it balanced well? And do you think I am okay in the blocks category now that I traded Duncan? Or should I give up some guards for a good centre? You can see I can definitely spare a guard or two.

You could definitely use a shot blocker beyond J-Smooth, and obviously dealing one of your excess guards makes the most sense. Here’s a play for you. Parlay Cassell, who’s hot now that he’s taken over the starting gig, but his plantar fasciitis will definitely act up again, into Ben Wallace, who’s value has slipped, but offers the shot blocking you need.

Make that deal and you will be on your way up in the standings.

Re: Position Battles: No Answer for Sixers

The fans in Philly are very passionate about our teams. To mention the battery thrown at J.D. Drew, while talking about the Sixers, wasn`t right. Why not mention snow balls at Santa? Basketball stick with basketball fans. You know the person who was spit on by Charles Barkley? Ask her about’Sixer fans? By the way, look at Drew. He turned out to be a real creep. It should have been a 12-volt battery!

Lighten up, man. Just having some fun there.

As a lifelong Flyer and Phillie fan I know all about Philly sports passion. I know that the likelihood of a battery being thrown at a Sixer game is probably less than 30 per cent.

As for Drew, I think he was just getting some pretty bad advice from Scott Boras. I don’t blame Drew; I blame Boras in that situation.

Oh, and I have thrown snow balls at Santa for what it’s worth. It was a department store Santa, but that still counts, doesn’t it?

This is the second question I have emailed you in recent weeks. I appreciate the responses too!

Question: I have Michael Redd and my league’s playoffs start in eight weeks. I’m in 11th place out of a possible 12 teams, but I am only about six games behind the fifth-place team. Six teams make the playoffs. Would it make sense to trade Redd since he will come back and only be available for two-to-three weeks which by that time my team would be out of the playoffs? If I were to trade him, what kind of value do you put on him even though he’s injured?

Second question?! Okay, that will be $10, please (in small, unmarked bills under the park bench, preferably).

If you are making a serious playoff push, you’ve got to have all hands firing, and seeing as how Redd won’t provide that much value for you, it probably does make sense to sacrifice him. Obviously you’re not going to get full value back, but I think if you manage to get someone like J.R. Smith (assuming you want a SG back) or better in return, then you’ll make out okay. I’d say anything more valuable than that would be a real bonus.

This is just a minor move, but if you needed to have one of these guys in your starting lineup short-term in a h2h points league, would you go with Kyle Korver or Grant Hill?

Who has more upside when healthy?

This is a pretty close call. While I like Korver’s 3s and his FT percentage, Hill’s FG percentage sure is nice. It comes down to Hill’s incessant injury risk (damn, he’s out now because of a pinky!). I mean, forget about Hill’s upside when he’s healthy. When is that going to happen exactly?

Go with Korver. He’s snapped his recent slump and someone has to score for Philly besides Iggy.

Thanks for answering my questions; I really appreciate it.

Another question: someone has proposed trading Joe Johnson for Allen Iverson and Raymond Felton. Since I already have Steve Nash, Chris Paul (IL) and Deron Williams as my other PGs, do you think I should pull this one? Johnson is PG/SG who shoots 3s.

What is your opinion on this? Please get back to me soon.

My pleasure, man. Just spread the RotoRob love in return.

As for this deal, one word for you: no!!

This is an outrageous trade for you. Johnson averages 2.2 3-pointers per game. Felton gets 1.4 and Iverson gets 0.9. That’s 2.3 per game. Johnson does not help you in this deal at that price. I wouldn’t trade A.I. straight up for him, unless it would guarantee victory, never mind throwing Felton into the mix. Just because you already have other guards, doesn’t mean you shouldn’t get full value in return. That’s how championships are won (by the other team making that deal, that is).

Do not make that deal.

I know you want a 3-pointer bad, but you should offer up something to another team’s weakness. That’s what this other owner is doing to you.

By RotoRob
This entry was posted on Friday, January 26th, 2007 at 12:48 am and is filed under BASKETBALL, Dear RotoRob, RotoRob. You can follow any responses to this entry through the RSS 2.0 feed. You can skip to the end and leave a response. Pinging is currently not allowed.