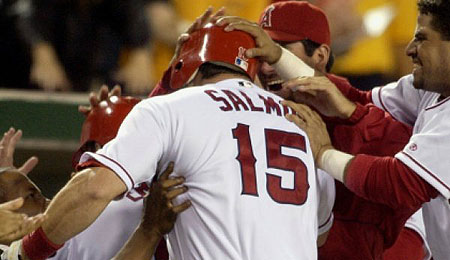 The Angels won’t be doing any celebrating this season with long-time star Tim Salmon, who’s opted to swim upstream into retirement.

Unless you consider Gary Matthews Jr. and Shea Hillenbrand some kind of offensive panacea, or the team has got something up its sleeve still, the Angels will again enter 2007 without the second impact bat they so desperately need to complement Vladimir Guerrero. Sure, the pitching remains top drawer (after all, the Halos were loath to give any of it away), but is this club any better than the one that fell four games shy in 2006? In this week’s Offseason Lowdown, we explore the situation in Anaheim, er, Los Angeles.

There are several key questions facing the club, including who will play first, how Howie Kendrick will do as a full-timer at second and how the Angels will deal with injuries to Juan Rivera and Bartolo Colon.

We’ll tackle all these issues and plenty more as we preview the Los Angeles Angels’ 2007 season in Offseason Lowdown.

By RotoRob
This entry was posted on Thursday, January 25th, 2007 at 3:26 pm and is filed under BASEBALL, Offseason Lowdown, RotoRob. You can follow any responses to this entry through the RSS 2.0 feed. You can leave a response, or trackback from your own site.