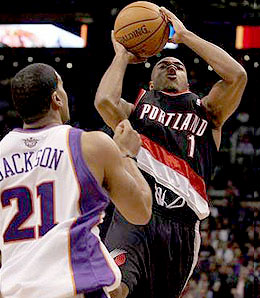 The Portland Trail Blazers have made tremendous progress from last season’s disaster. While they have a ways to go before they return to the post-season dance, a great draft last summer has helped launched the club on the right path. In this week’s Position Battles, we unravel the mystery of how the Jail Blazers have transformed themselves into a team on the rise.

Udonis Haslem is gaining value thanks to some heavy minutes recently; Ronnie Brewer has found his way into the DNP Zone, but could still emerge as a second-half factor; and Jason Williams looks like he might finally be past his knee issues.

We’ve got all this and more in this week’s Position Battles. And there’s no need to go to YouTube to find it!

By RotoRob
This entry was posted on Wednesday, January 24th, 2007 at 3:33 pm and is filed under BASKETBALL, Position Battles, RotoRob. You can follow any responses to this entry through the RSS 2.0 feed. You can leave a response, or trackback from your own site.