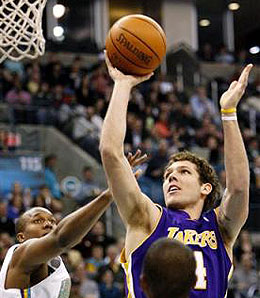 On the anniversary of Kobe Bryant’s explosion, it was Luke Walton who played the hero down the stretch.

Do you know what you were doing one year ago yesterday? I do. I was watching the Raptors stand around and marvel while Kobe Bryant torched them for a ridiculous 81 points. So to celebrate his performance for the ages, what did Kobe did for an encore? Oh man…the stiff only managed 42 points. Give me a break! Cut the slacker! In today’s Daily Dose, we examine yet another Kobe gem and how his increased maturity level as a player has helped the Lakers continue to win.

By RotoRob
This entry was posted on Tuesday, January 23rd, 2007 at 4:58 pm and is filed under BASKETBALL, NBA Daily Dose, RotoRob. You can follow any responses to this entry through the RSS 2.0 feed. You can leave a response, or trackback from your own site.