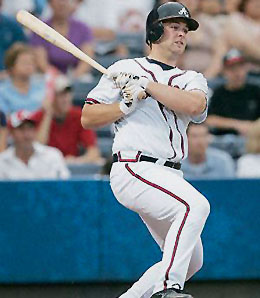 Brian McCann’s sweet left-handed stroke has helped him soar up the fantasy rankings.

We kick off our 2007 fantasy baseball rankings with a look at the key men behind the plate.

It’s hard to imagine any position where the top three are as clear in a given year as they are for fantasy catchers in 2007. After that, however, is when things get trickier, especially towards the late first-round picks.

1. Joe Mauer, MIN: Might he have single-handedly erased the bias against high school catchers, much in the way Billy Wagner did for left-handed closers? Not only did he bag a batting title, but Mauer is a workhorse who continues to develop more patience at the plate. Oh, did I mention he’s not even 24 yet?

2. Brian McCann, ATL: Another youngster (he won’t be 23 until next month), McCann should combine with Mauer to provide a fantastic one-two at the top of the catcher rankings for years to come. Capable of logging heavy action, McCann’s overall development as a hitter has been amazingly rapid.

3. Victor Martinez, CLE: Talk of shifting V-Mart to first base seems to have died down for now, which is great news for his fantasy value. Martinez’s power numbers have slipped the past two years, but each time they’ve been replace by BA and OBP as his overall skill as a hitter has improved. He’s still in the prime power years, so a return to the 20-homer mark is quite conceivable.

4. Ivan Rodriguez, DET: I-Rod proved he has plenty left in the tank, bouncing back from a sub par 2005 to rack up his 10th .300 season last year. I like the fact that his walk rate and BB/K ratio also rebounded. Father Time seems to have been held back by Pudge, who in fact is not really so pudgy anymore.

5. Kenji Johjima, SEA: Johjima’s rapid adjustment to the North American game was all the more impressive because of his responsibilities as a game caller. While I’d like to see more walks, the power was nice, and it wouldn’t shock me if he were capable of a bit more, especially as his comfort level increases.

6. Ramon Hernandez, BAL: Hernandez upped his flyball rate, and a career-high in dingers followed, but take away that .351 September and he barely hit over .260. Still a solid fantasy catcher, but I’d be worried about the declining BA.

7. Jorge Posada, NYY: He’s now 35 and his runs total has dropped three straight years, but Posada proved he’s not ready to call it a day as he put together a fine 2006 season. He probably won’t duplicate his RBI total from last season, but Posada remains a top notch fantasy backstop.

8. Russell Martin, LAD: This Canadian kid showed a superb all-around offensive package, and he very likely could join Mauer and McCann to form a young catching trinity similar to the days when A-Rod, Jeter and Nomar were the big three at shortstop.

9. Michael Barrett, CHC: It was the best of times, it was the worst of times for Barrett in 2006. He managed 25 doubles, tied his career high in homers and enjoyed his finest overall season, despite dealing with more bumps and bruises, getting suspended for a tilt with his good buddy and Windy City rival A.J. Pierzynski and having to shut it down early because of bleeding balls. If he manages 450 at-bats this year, look out.

10. A.J. Pierzynski, CHW: Doesn’t the sight of Pierznyski and Barrett going at it make you hanker for more Cubs-White Sox match ups? Appearing in more games than ever before, Pierzynski settled into a nice groove where he’s maintained his recently-developed pop, but has gotten back to his high average ways. Yes, he’s helped by a strong White Sox lineup, but if Pierzynski can keep that power-BA balance, he’ll remain a strong fantasy catcher regardless of where he plays.

11. Mike Piazza, OAK: Piazza proved he could still hit, and it’s reasonable to assume that he’ll be capable of even more this year, freed from the physical demands of catching. Keep in mind that he’s 38 now and will be hard pressed to qualify at catcher in 2008, which makes him a much more attractive option in non-keeper leagues.

T-12. Paul Lo Duca, NYM: You can flip a coin with the next two catchers. Look elsewhere if you want long balls, but as long as Lo Duca continues to get on base, he’ll score a ton of runs on a potent Mets’ team.

T-12. Jason Kendall, OAK: Kendall has fallen back to the pack because he has absolutely no power anymore and is no longer a top base stealer. But he hits for a nice BA and as long as he can steal even double-digit bases, he remains a nice bet at catcher.

14. Bengie Molina, SF: Molina’s trend to more fly balls won’t fly in AT&T the way it did in the Rogers Centre. He’s definitely topped out in the pop department, so don’t look for any further development there. A more likely scenario is he slips to low double-digit power. Molina’s strike zone judgment regression is another concern. It wouldn’t shock me if he’s barely a top 20 catcher by season’s end.

15. David Ross, CIN: He’s yet to prove he can sustain his numbers over a full season, but a .579 slugging percentage last season suggests Ross could emerge as the most dangerous power hitting catcher in the game in 2007. He’s probably never going to be this cheap again and will likely be a top 10 backstop before next year.

Bubbling Under: Just a tick below the top 15 are new Brewer Johnny Estrada, steady warhorse Jason Varitek and young Ronny Paulino, who could also be a big surprise. Any one of this trio could emerge as a viable starting fantasy catcher in standard 12-team leagues.

Sleeper: Gerald Laird is likely to be seriously undervalued heading into Draft Day. But Texas let Rod Barajas walk and has committed to Laird as its main man. He can definitely hit, and is poised for a nice power breakout.

Rookie Watch: If you’re like me, and not overly impressed with Yorvit Torrealba, and probably believe that Javy Lopez is just about done, then Chris Iannetta becomes a very intriguing player to watch. The former Tar Heel dominated Double-A and then hit .351 in Triple-A last year before forcing his way to the Rox. He’s ready for a real shot.

Prospect: Jeff Clement’s prodigious power (he set a high school record for career homers) failed him in Triple-A, so he clearly needs another full year of seasoning. There’s no need to rush him with Johjima proving he can do the job, but Clement is a name that prospect hunters must be cognizant of.

By RotoRob
Tags: Atlanta Braves
This entry was posted on Monday, January 22nd, 2007 at 2:01 pm and is filed under BASEBALL, Cheat sheets, RotoRob. You can follow any responses to this entry through the RSS 2.0 feed. Both comments and pings are currently closed.