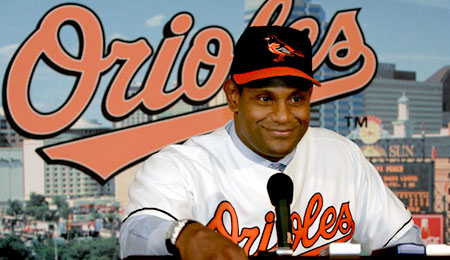 Sammy Sosa hoped his season in Baltimore would earn him a free agent offer; instead he wound up out of baseball. Now he’s trying to come back with the Rangers.

Yup, Sammy Sosa is back for another kick at the can. With a minor league deal from Texas about to be finalized, Sosa will be returning to the very roots of his professional career in an attempt to turn back the clock. Should we call up Sammy on his iPhone and tell him he’s too old for this stuff, or does he really have what it takes to become a fantasy asset again? In this week’s Offseason Lowdown, we take a close look at the situation.

We also check in on Carlos Guillen and Detroit’s efforts to ink him to an extension before he walks as a free agent at the end this coming season.

Read all about Slammin’ Sammy’s comeback attempt in this week’s Offseason Lowdown.

By RotoRob
This entry was posted on Thursday, January 18th, 2007 at 3:30 pm and is filed under BASEBALL, Offseason Lowdown, RotoRob. You can follow any responses to this entry through the RSS 2.0 feed. You can leave a response, or trackback from your own site.