Position Battles: No Answer for Sixers 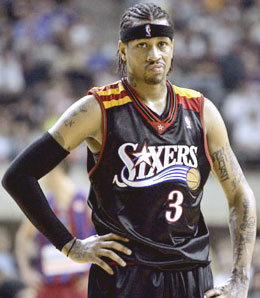 Now that the Allen Iverson era is over in Philly, it’s a whole new ballgame. So far, the results have been pretty ugly.

The soap opera that was Allen Iverson and Chris Webber is over for the Philadelphia 76ers, but now the team must carve out a new identity for itself. One can’t help but wonder if the one A.I. era will soon usher in the Greg Oden era. In this week’s Position Battles, we check in the PT situation in the City of Brotherly Love.

Will Caron Butler’s heavy PT come back to haunt him in the second half? His massive minutes totals, along with those of Gilbert Arenas and Antawn Jamison, are hurting the PT of reserves like Donell Taylor and Jarvis Hayes.

We check in on this, plus offer plenty more fantasy basketball insights in this week’s Position Battles.

By RotoRob
This entry was posted on Wednesday, January 17th, 2007 at 4:05 pm and is filed under BASKETBALL, Position Battles, RotoRob. You can follow any responses to this entry through the RSS 2.0 feed. You can leave a response, or trackback from your own site.