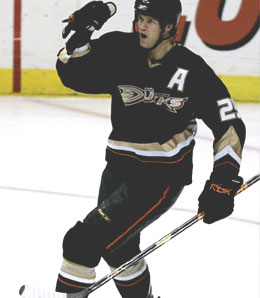 The Ducks haven’t had much to celebrate lately thanks to Chris Pronger’s broken foot.

The entire Ducks team is slumping with Chris Pronger and Jean-Sebastian Giguere. Teemu Selanne has just two points in his last three games; even worse, he’s an ugly -4. The rest of the Ducks aren’t faring much better — Ilya Bryzgalov has struggled since his return and even dependable captain Scott Niedermayer has gone pointless in his last three with a -6.

Brad Richards started off the season pretty poorly and if you look at a snapshot of his numbers, things still aren’t that great. However, a recent four-game point streak could be a good sign that Richards is coming back into form. It doesn’t hurt that the Lightning power play is going better than it has in a long, long time.

Last week, I noted that Mike Comrie was struggling to find a groove with the Senators. He’s showing a little bit of life now with four points in his last three games. More importantly, he’s getting power play time and two of those points came on the power play.

Mark Ryan Clowe down as the recipient of the “Lucky Shark of the Month Award” as he takes the coveted spot that was once held by Mike Grier alongside Patrick Marleau and Joe Thornton on the league’s best power play. The result? Try 12 points in his Clowe’s seven games.

The Oilers, mired in the ever-competitive Northwest Division race, will have to deal without Ales Hemky as he deals with a shoulder injury and Jarret Stoll, out with the lovely busted nose after courtesy of a Samuel Pahlsson hit.

Speaking of Northwest injuries, it’s looking like Jarome Iginla will be out longer than expected. He’s looking to come back in mid-February right now; until then, Daymond Langkow’s hot streak will have to carry the Flames because Alex Tanguay’s cold streak (seven total points in January so far) isn’t gonna do it.

In a “things are all relative” point of view, Lee Stempniak is doing all right. The unheralded Stempniak is only six points out of the Blues scoring lead…of 34 points. Still, Stempniak put together a nice little hot streak earlier in January and might be a decent pick up if your fantasy team has the injury bug. I mean, someone has to score on the Blues, right?

The rumors are true — Marian Gaborik is alive and kicking. Since his return, Gaborik’s gone at a point-per-game pace. If you take out his first two games where he was getting his legs back, Gaborik’s got a nice four-game point streak going on.

Need a starting goalie? He won’t get wins but Sean Burke will get playing time at his new address in LA. Some points are better than no points, at least in the fantasy world.

The Islanders have struggled for consistency this season and so has Miroslav Satan. The demonic winger goes for impressive point streaks, then disappears for four or five games at a time. For what it’s worth, he just had two assists against Philly, so he might be okay for the next week or so.

Ken Hitchcock’s goal is to make Rick Nash a complete player. That will help in the long run but until then, it’s not helping out his fantasy owners. In January, Nash has only played three games and has a whopping zero points.

It’s All-Star time…too bad All-Star games don’t count towards your fantasy team. The NHL schedule is light this week with the big showcase taking place on Wednesday. Some notable matchups before then:

By Mike Chen
This entry was posted on Friday, January 19th, 2007 at 2:11 pm and is filed under HOCKEY, Ice Chips, Mike Chen. You can follow any responses to this entry through the RSS 2.0 feed. You can leave a response, or trackback from your own site.