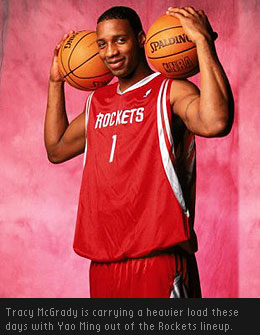 When Yao Ming went down with a busted leg as an early Christmas present for Houston, weren’t the Rockets supposed to crash and burn? Apparently no one told Tracy McGrady. And it looks like the T-Mac that won back-to-back scoring titles has suddenly re-emerged, leading the team to a 6-2 stretch without the Ming Dynasty. McGrady is absolutely on fire, scoring at least 30 points in six straight games. In today’s Daily Dose, we check in on the T-Mac renaissance.

Jermaine O’Neal hurt his ankle in practice and could miss action tonight; Larry Brown says he has no designs on the Sixers’ coaching job (sure you don’t, Larry); and Kirk Hinrich was throwing up bricks yesterday.

It’s all in today’s Daily Dose, chock-full with tons of other fantasy basketball tidbits to get you going today.

By RotoRob
This entry was posted on Tuesday, January 9th, 2007 at 4:49 pm and is filed under BASKETBALL, NBA Daily Dose, RotoRob. You can follow any responses to this entry through the RSS 2.0 feed. You can skip to the end and leave a response. Pinging is currently not allowed.