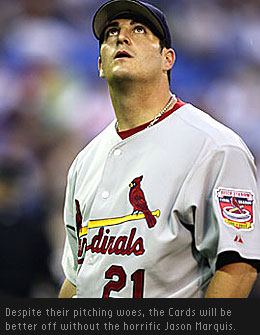 The concept that you can’t win in baseball without pitching is as old as the game itself. Leaving yourself short of starting pitching is one of the sport’s cardinal sins. So it seemed all the more ironic that last year that the newest victim of this old age adage would be none other than baseball’s redbirds, the St. Louis Cardinals.

After all, blessed with a pitching staff that was middling at best (16th in the majors ERA at 4.54, tied for 11th in WHIP) and at times downright brutal (26th in strikeouts, tied for the seventh-most homers allowed), no one gave the Cards a snowball’s chance in hell of doing anything in the playoffs. In fact, the team stumbled so badly down the stretch that it barely hung on to what seemed a sizeable lead over the last couple of weeks.

No one saw this 83-win team making much noise in the postseason, yet the Cardinals pitching stepped up big time, giving up more than four runs just twice in 16 games as they fought their way to a World Series title. Twelve times they held their opponent to two runs or less, in what had to be among the most impressive performances by a depth-challenged pitching staff in recent memory.

Now, here’s the rub: can St. Louis do it again?

The Cards have already lost two big winners from their 2006 staff as Jason Marquis (14 wins, although left off the post-season roster) signed with the Cubs and Jeff Suppan (12 wins and huge in the playoffs) was lured away by big Milwaukee dollars (how’s that for an oxymoron?).

According to Gerry Fraley of the St. Louis Post-Dispatch, St. Louis is the first defending champion to lose two pitchers who won at least a dozen games since the 1997 Marlins. The Marlins, you may recall, dismantled their team for the first time after their inaugural championship season. Kevin Brown wound up in San Diego and Alex Fernandez missed the 1998 season because of injury. The ’98 Marlins, by the way, won 54 games.

Will the Cards be hurt by the fact that both of these starters wound up on division rivals? I doubt it. In fact, there may be a Trojan horse-like effect here. Marquis is simply crap, and giving a pitcher who recorded an ERA over 6.00 $21 million proves how desperate the Cubs were for pitching. Suppan, as good as he was at times in his three seasons in St. Louis, moves to the team he spent much of his time beating up. Fraley reports that Suppan has gone 6-1. 2.44 against the Brew Crew over the past three years, compared to 38-25, 4.18 against everyone else. Take that sweet ERA against Milwaukee out of the equation, and a pitcher who is slightly better than league average becomes league average at best. It’s not as big a loss as it seems, because it’s clear Suppan is not worth over $40 million.

However, that still leaves the question: who is starting for the Cards in 2007?

The top of the rotation is in great hands with ace Chris Carpenter back. In face, St. Louis rewrote his deal and handed him another $63.5 million over the next five years. Smart move? Well, he’s definitely an ace, but he was already under contract until 2008, so that’s money the Cards could have used to add another free agent starter, plus Carpenter’s had some injury issues over the years. Look, I love Carpenter, but this one could come back to bite St. Louis.

Number two starter? Take your pick: Kip Wells or Anthony Reyes. Wells was signed (relatively speaking) for a song after three down seasons, often marred by injury. He could be a huge sleeper or he could be this year’s Sidney Ponson. Reyes is someone I’ve liked for quite a while, and I still firmly believe that if he gets 25 to 30 starts in 2007, he’s capable of producing better results than either Suppan or Marquis.

Now here’s where things get tricky. The Cards are currently penciling Adam Wainwright in as their number four starter. Yes, they’re gambling that Jason Isringhausen will be healthy enough to return as the closer. This is a team that has shown a willingness to roll the dice, often with pleasant results, but this is a situation that has disaster written all over it. If Izzy can’t return, Wainwright will have to close, meaning the Cards will need at least two more starters.

Brad Thompson may fill one of those spots. The team plans to stretch him out in spring training in the hopes that he can make a successful return to starting (Thompson has started just one game in two seasons in the bigs, but did make 25 starts in the minor leagues, including spending the entire 2004 season starting).

Braden Looper is another pitcher St. Louis will try to convert back into a starter. For Looper, however, you have to go back to his pro debut in 1997 to find the last time he started a game. This moves reeks of desperation. St. Louis might be better off giving a shot to someone else who has starting experience like Randy Flores, Randy Keisler or Chris Narveson. Two other former starters, Josh Hancock and Josh Kinney, will not be given consideration for a starting gig.

Of course, the club could always re-sign Jeff Weaver and/or Mark Mulder. Weaver was a big-time playoff hero and now that all the top tier starters are off the market, teams should start to step up their interest levels in him. He may bag a three- or four-year deal. Mulder may yet re-sign with the Cards (although Cleveland and Texas are very much in the hunt), but don’t expect him to be ready until June or to start more than 25 games after rotator cuff surgery. This one is supposed to come to a head shortly, but it doesn’t seem likely that the Cards are going to cave in and give Mulder what he wants.

Who does that leave? Mike Smith? The 29-year-old righty was signed to a minor league deal and he did enjoy a solid season at Triple-A in 2006, going 11-5 with 110 Ks in 150 2/3 innings. Let’s hope it doesn’t come to giving Smith a real shot, but stranger things have happened, I suppose.

Don’t expect much immediate help from the farm. Jaime Garcia looks like a very good one, but he has yet to reach Double-A. Blake Hawksworth made a nice recovery, finally staying healthy last year, but he had a bit of control problems in his first taste of Double-A, and considering he’ll turn 24 during spring training, his ceiling isn’t extremely high.

St. Louis really needs to pull a rabbit of out its hat, if not a horse capable of making 30-plus starts without going Jason Marquis on them. Is it too late to hope that Rick Ankiel will change his mind? If not, Cardinals fans may have a long season in store.

By RotoRob
This entry was posted on Monday, January 8th, 2007 at 3:55 pm and is filed under BASEBALL, RotoRob, Spikes Up. You can follow any responses to this entry through the RSS 2.0 feed. You can skip to the end and leave a response. Pinging is currently not allowed.