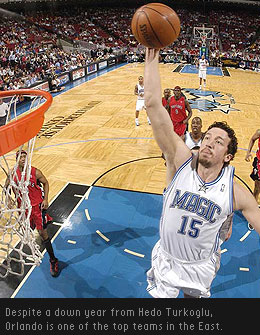 Despite an injury-fuelled swoon last month, the Magic has been one of the top teams in the Eastern Conference this season. Now, Orlando faces a tough four-game road trip that will test its hold on the Southeast Division. In this week’s Position Battles, we visit the Magic Kingdom and see how the playing time is shaking down there.

Mike James seems to have solidified his starting gig for now; Dikembe Mutombo can’t keep playing heavy minutes at his age; and Trenton Hassell is getting a ton of PT these days.

We’ve got all these stories, plus enough to make Maria Sharapova squeal with delight in this week’s Position Battles.

By RotoRob
This entry was posted on Wednesday, January 10th, 2007 at 3:50 pm and is filed under BASKETBALL, Position Battles, RotoRob. You can follow any responses to this entry through the RSS 2.0 feed. You can leave a response, or trackback from your own site.