Offseason Lowdown: Around the Senior Circuit 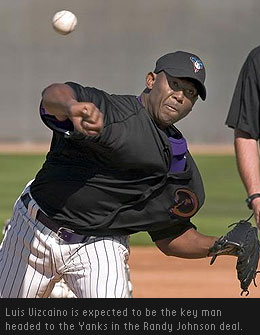 Apparently, this whole Randy Johnson back to the Snakes thing is closer than most of us thought. Veteran reliever Luis Vizcaino will reportedly be the key piece heading to the Yanks, along with one or two pitching prospects. We discuss the latest news in this ongoing saga in this week’s Offseason Lowdown.

The Reds have sent Brendan Harris to the Rays; Jeff Suppan has officially become an overpaid Brewer; Terrmel Sledge could lead off for the Padres; and Atlanta may want more in return for Adam LaRoche than the Pirates are willing to part with.

We’ve got all this and the rest of the fantasy baseball news from around the National League this week in the Offseason Lowdown.

By RotoRob
This entry was posted on Thursday, January 4th, 2007 at 3:10 pm and is filed under BASEBALL, Offseason Lowdown, RotoRob. You can follow any responses to this entry through the RSS 2.0 feed. You can leave a response, or trackback from your own site.