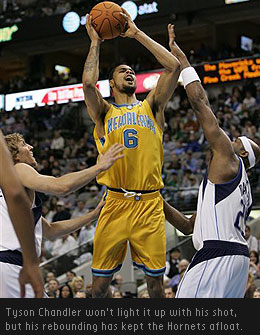 What’s next for the New Orleans, er, Oklahoma Hornets? First Katrina decimates their home city, forcing the team to spend essentially a full season on the road. This year they get to play just six games at “home” in New Orleans — why are they still even associated with the Big Easy? So the Hornets buck the odds and get off to an amazing start only to suffer a wave of injuries that would make this guy blush. And so began the tailspin. In this week’s Position Battles, we examine the current situation for the Hornets and try to assess who still has value for New Orleans/Oklahoma City.

Ruben Patterson and Charlie Villanueva are stuck on the Bucks’ bench while Chris Kaman seems to have gained power despite shaving his pretty-boy locks.

We’ve got it all and lots more fantasy basketball fodder in this week’s Position Battles.

By RotoRob
This entry was posted on Wednesday, January 3rd, 2007 at 4:30 pm and is filed under BASKETBALL, Position Battles, RotoRob. You can follow any responses to this entry through the RSS 2.0 feed. You can leave a response, or trackback from your own site.