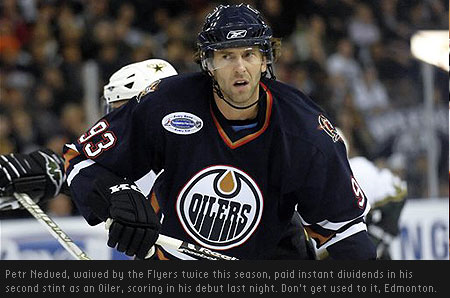 Let’s start with a few transactions of note. Petr Nedved was claimed by the Edmonton Oilers after several teams went nuts trying to Buy It Now from Philly. Nedved will be given a go with the ultra-talented Ales Hemsky, but who knows which Nedved will show up? The Ottawa Senators acquired Mike Comrie to fill in for the injured Jason Spezza and Mike Fisher, and Comrie responded by putting up two assists. Comrie should see a ton of time with Daniel Alfredsson and Dany Heatley, including quality power play minutes — at least until Spezza comes back after the All-Star break.

Out west, the Sharks shocked a lot of people by sending down Steve Bernier and Matt Carle. Coach Ron Wilson hinted that Carle could be back pretty soon after he gets his legs back from hitting the NCAA-schedule wall, but Bernier needed “to work on some things that didn’t show up in his stats.” With Joe Pavelski firing on all cylinders, the Sharks don’t really need Bernier back right away, so take note, fantasy owners. Staying in California, with Chris Pronger and Francois Beauchemin out, the Ducks have traded for Ric Jackman. Look for Jackman to get some quality power play time until Pronger gets back.

One effect of the Comrie trade is that Stephen Reinprecht will now get a lot more time centering the Coyotes’ top line. The ‘Yotes have been picking up momentum as of late, so Reinprecht might not be a bad depth pick.

Jarome Iginla was diagnosed with a sprained MCL Friday morning. He’s out at least a week, but sprains are tricky injuries, so look for Iginla to be a bit slow even when he comes back.

Some good news out of Boston — rookie Phil Kessell, after undergoing treatment for testicular cancer, has recovered to the point that he’s been sent down to the AHL for a quick rehab assignment. Boston is expected to recall the rookie on Sunday, so he’ll be back helping out by next week.

Peter Forsberg is out yet again, this time with a groin problem to go with the foot/ankle/concussion issues that always plague him. Foppa, just call it a career and end it with dignity.

Hope you didn’t start Dominik Hasek or Tim Thomas on Thursday night. Both netminders let in eight goals. For anyone who owned both goalies and elected to start them, my sympathies.

Speaking of cold goalies, Rick DiPietro and the Islanders are mired in a pretty nasty six-game losing streak. Two of those losses were shutouts and the Isles have only put up six goals total in this span. Bench DiPietro for now until the Islanders come out of their funk, but don’t worry about him taking a nosedive — it’s not his fault the Isles are losing.

Even though the Kings aren’t winning a ton, Alexander Frolov is heating up. The young Russian star has 12 points in his past six games.

Ray Whitney is quietly having a career year. The crafty Carolina veteran has 42 points in 40 games, including a recent hot streak of eight points in seven games. Whitney is often overshadowed by teammates Eric Staal, Erik Cole and Rod Brind’Amour, but he’s on pace to put up even better numbers than the year he played with Pavel Bure in Florida.

Up in the swamp, Zach Parise is coming into his own. The young forward is on pace for at least 30 goals and is providing some help for a Devils squad suffering from a disappointng season by Brian Gionta.

Looking for a good temporary pick up on the wing? Mike Grier landed a dream job playing on a superline with Patrick Marleau and Joe Thornton out in San Jose. How’s it working out for him? Four points in two games so far. Marleau and Thornton will eventually be separated, but you can ride Grier (who should be available in most leagues) as a sleeper pick for now.

By Mike Chen
This entry was posted on Friday, January 5th, 2007 at 6:59 pm and is filed under HOCKEY, Ice Chips, Mike Chen. You can follow any responses to this entry through the RSS 2.0 feed. You can leave a response, or trackback from your own site.