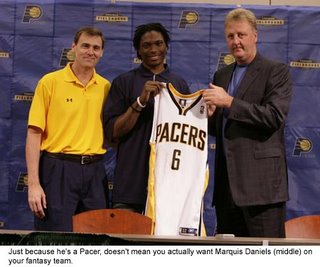 Welcome to the newest feature on RotoRob.com. Each week (or at least periodically, shall we say), I’ll be answering your fantasy basketball (or perhaps other sports) questions. While I always try to respond individually as quick as I can, sometimes it’s easier for me to spend some time developing a more complete answer rather than simply provide an off the cuff response.

Dear RotoRob is where you’ll find those more complete answers to your fantasy questions. Let’s get to it, as I’ve got several questions in the old mailbag from the past week.

I came to you last year for some fantasy advice that was nice (actually I won my league ;o)).

I wanted to have your opinion on my team, I am a bit confused, but it’s just the start of the season.

I am looking for my weaknesses so I can make a trade to make my team better. Can you tell me what you think of my team and which players to drop or look to trade. Thanks a lot.

G/F: Daniels
G/F: Josh Smith
G/F: Luol Deng
G/F: Bonzi Wells
G/F: Webster (I have him as a replacement for our IL)

How many teams in your league? That’s a very strong looking team, so I’m assuming you only have eight or even less teams.

I’d say you’re making the right two choice in dropping Daniels as Jack should definitely be kept over him at this point. I think Webster will emerge as very useful, especially in the second half, so I think I’d hang on to him at this point. Wells is another bubble player right now as he’s taking DNPs as he works his way back into shape. I still think he winds up as the two-guard in Houston, but I’m wondering what the hell is going on with him.

I would also drop Perkins. He’s struggling and wasn’t playing a ton and with Theo Ratliff back now, I expect Perkins to play even less (which is kind of surprising as with Al Jefferson out, Boston is seriously undersized). If Perkins picks it up with the kind of rebounding skills he flashed last year, you can always pick him back up on waivers.

Olivier wrote back to tell me he was in a 12-team league which makes me wonder how the hell he managed to get that much talent on his team. It’s amazing how well you can do at the draft when you slip animal tranquilizers into the other owners’ drinks.

Next up, Evan from Marquette, who’s a big David Lee fan apparently, had a question:

I wouldn’t move Curry for Harris. The situation is too volatile in Dallas for him to be a dependable play, besides, even if he gets 30 minutes or more, he’s not a huge assist man. While I like Harris more than Greg Buckner or Anthony Johnson, I am not convinced Harris will hold the job down. Buckner is a tremendous defensive player (just like Avery Johnson loves) and with Dallas struggling, Johnson is sure to get his chance as well.

Curry seems to be committed to getting more boards this year, so I still favor him over Harris. He’s even scoring more, so if you can take the hit in FT percentage, Curry is your man. Plus you don’t have to worry about Larry Brown sitting his ass on the bench (forget about last night’s game’Curry was simply in foul trouble ‘ no biggie).

If you really need assists, is there a true PG you could deal for? Or how about scouring the waiver wire? Ruben Patterson is probably available and seems to be getting a fair amount of assists and will retain value until Bobby Simmons comes back in a couple of weeks. You could ride Gary Payton until Jason Williams gets back.

By the way, Frye is in trouble. I think he might lose his job — possibly to your man, Lee!

Evan wrote back to tell me he did opt for the waiver wire, picking up Jamaal Tinsley. Great call there, man. Tinsley is a super dime machine until the injury strikes. And yes, it will strike.

Next up, Nicholas from Vancouver wrote in and he had more of a comment than a question, but it’s worth passing along:

I watched the T-wolves’ game Tuesday night and noticed Randy Foye’s minutes rose once again, while playing the final minutes in a comeback bid. Ricky Davis and Trenton Hassell seemed to be the most noteworthy guys on the bench, as Minnesota went with Marko Jaric, Foye, Mike James, Kevin Garnett and Mark Blount in the final minutes. Also, Foye seemed to run things from the point as much or more than James. He looked really good.

Still missing the Grizzlies? Not the way they’re playing so far this year, I bet.

Anyways, thanks for the note. I did notice that Foye is creeping up there. I expect him to take Hassell’s SG job fairly soon. I wouldn’t sweat it about Davis being on the bench; he was in a bit of foul trouble and just couldn’t find his shot that night. He’s a guy who thrives on big minutes and he’s still their second or third scoring option.

As for Foye running the point, James is not a true point guard, something that I had to witness here in Toronto for 82 games last year. Unfortunately, the Raps didn’t have anyone else to carry the ball last season. But in Minnesota, James can play like a two-guard to his heart’s content and the team still has ball-handlers and people who can distribute like Jaric (when he feels like it) and Foye to a lesser extent.

Thanks for the tip on Foye. I believe when all is said and done, he could challenge Brandon Roy for the ROY Award.

Up next, Jordan, who needs trade advice:

I appreciate your time and advice. I was wondering, given my team listed below, would you trade Al Harrington for Samuel Dalembert? This is a head-to-head league with 12 teams with 13 spots on the roster and the format is g, g, f, f, c, util, util, util.

Thanks for your time and appreciate your response as quickly as possible. Keep up the great work.

It looks like you’re definitely weakest at C and could use Dalembert’s shot blocking. I watched the game against Toronto Wednesday night, and Sam looked like an absolute beast, and now that he’s working his way back into shape, the PT is going up. I love Harrington, but I think his offense suffers in Indiana because the Pacers run such a conservative show. His rebounding is up, but no way does he build on last year’s breakout, scoring wise. That’s a great return for you if you believe that Dalembert is over his injuries. The way Randolph is playing this year, you can afford to make this move for the sake of extra boards and blocks.

Just make sure you ask for some health insurance as a throw-in to the deal.

Olivier kept me hopping this week. Here’s a trade offer he received:

Someone offered me Dwyane Wade and Ryan Gomes for Josh Smith and Kyle Korver. I love Kyle and Josh, but Wade is the best player here! Should I pull the trigger on that one? I’ll miss Korver’s threes and Josh’s blocks.

Wade’s numbers are down, but like you said, he’s the man. You know he’ll do his thing, especially when Jason Williams gets back.

Smith is an absolute beast, but he’s off to a bit of a slow start (for him) as Joe Johnson is on fire and getting most of the touches in Atlanta. Korver, meanwhile, can’t keep shooting at the rate he’s set. I mean, two out of every three from downtown? Uh, yeah. That’ll be dropping.

The way I look at, Korver is over his head right now, so you’re buying low on two players and selling high on one. Jefferson going down clinches it for me’do the deal.

Very seldom do you lose a trade when you get the best player. Losing Smith will hurt, and you might need to scour the waiver wires to make up for Korver’s threes, but Wade is actually developing an outside game (he’s averaging one 3-pointer per game already), so he will help you some there.

Question for you: would you trade Tony Parker and Chris Webber for Caron Butler and Leandro Barbosa? I need three pointers and I like that Barbosa brings them. I love Parker, but also have Mike Bibby, Baron Davis and Deron Williams, so I can probably afford to move Parker. I have a very good team so want to make sure I am making the right move. Thanks!

On paper, this isn’t a bad deal, but I’m going to have to nip it in the bud for several reasons, not the least of which is your motivation for making the deal seems flawed.

Just because you can afford to deal Parker does not take away from the fact he’s the best player in the trade (see the letter above). Parker has taken his game to a new level this season. His scoring is up, but he’s still shooting the lights out. It looks like his outside game is back too. I don’t care if you have plenty of PGs ‘ there have to be other teams in your league that would kill for Parker. So let them. If you really want to move him, let the highest bidder come forward.
Don’t get me wrong ‘ Butler is a seriously underrated player and his steals are sweet, while Barbosa is going nuts right now (too nuts? Is he due for a letdown?). And I like the fact you’re turning Webber (who looks done) into something more valuable than a bottle of ketchup.

But you are selling low on C-Webb here. Maybe you’re better off keeping him and seeing if he can get hot and then trade him then. I’m not sure if that’s going to happen, but if you just auction off Parker y himself, you’ll get better value.

I picked up Barbosa on waivers just before the season, and yeah, he’s freaking unbelievable right now. But when Raja Bell comes back, Barbosa will still have to fight with Boris Diaw for a starting job, and Jalen Rose will also have an impact on Leandro’s PT.

My advice: keep Parker for now and let other teams bid against each other for him.

By RotoRob
This entry was posted on Friday, November 10th, 2006 at 1:52 pm and is filed under Dear RotoRob, RotoRob. You can follow any responses to this entry through the RSS 2.0 feed. You can skip to the end and leave a response. Pinging is currently not allowed.