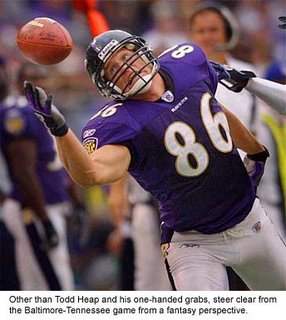 Baltimore at Tennessee – Well, this is just cruel. Other than Todd Heap, there really aren’t any great starts from either side in this game. Mark Clayton got a lot of looks last week, and he might be something of a sleeper pick on Sunday. Still, don’t use him as anything more than a third wide out or flex player. Moving right along…

Buffalo at Indianapolis – On his fourth carry of the game, Willis McGahee was pancaked and it resulted in a rib injury which will keep him out indefinitely. If no one in your leagues has picked up Anthony Thomas yet, now would be the time for it. The 2001 rookie of the year looked good in relief of McGahee. Other than that, Lee Evans scored again last week and has turned into something of a weekly starter.

I feel like I write this every week, but you don’t need me to tell you what to do with most of your Colts. Peyton Manning, Marvin Harrison and Reggie Wayne are having great seasons. Joseph Addai, however, has just started to creep into fantasy legitimacy. In four of his last five games, the rookie has either 100 total yards or a touchdown. That kind of production is above average for a flex player, which is what he can be used as on most fantasy teams.

Cleveland at Atlanta – Braylon Edwards came back to life last week, as he scored a touchdown for the first time since Week Three. It’s still a gamble to start him, but I’d certainly feel safer this week than for the last few. Reuben Droughns stunk again last week despite the fact that the Chargers were playing without any linebackers. Okay, that might not be a fact, but it might as well be true. Atlanta has been inconsistent in stopping the run, but I’d sit Droughns if at all possible. It’s too risky. Kellen Winslow is still a weekly starter.

Just when we were all getting comfortable with the idea of Mike Vick as a real NFL quarterback, he goes out and puts up a dreadful performance against the Lions. Yes, he had 80 rushing yards, but three turnovers put a damper on his whole game. I still consider Vick a low end starter this week, but the Browns’ pass defense is quite good, so temper expectations a bit. Warrick Dunn is a decent fantasy option, and Alge Crumpler will do his thing.

Green Bay at Minnesota – I’d avoid all Packers in this game other than Donald Driver and Greg Jennings. The Vikings are a good defense and have been stopping most teams that aren’t led by Tom Brady. As for the Vikings, it’s still all about Chester Taylor. Minnesota has committed to the fact that it will overuse Taylor every single week.

Houston at Jacksonville – At this point, the Texans are playing for two things. First and foremost, they are going for a top draft pick in the 2007 draft. Second, Andre Johnson leads the league in receptions and receiving yards. With the Texans getting behind early just about every week, the lookout for the top draft pick and Johnson leading the league in the receiving categories both seem like pretty good bets.

The Jaguars’ run game has been one of the bigger surprises this season. Fred Taylor has always run well when healthy, but his success combined with the more-than-adequate performances from Maurice Jones-Drew has been very nice to see. Taylor continues to be a great second fantasy back and Jones-Drew is still a great flex player. Matt Jones is something of a surprising start. He came back from injury well last week and should serverely outmatch the Houston secondary.

Kansas City at Miami – With Trent Green’s imminent return, it will be interesting to see how the quarterback controversy is handled. Damon Huard has been nothing short of spectacular in relief, as he has thrown 11 touchdowns compared to only one interception. Keep him starting until he’s no longer playing. Tony Gonzalez has picked up his play as of late, and that will continue.

Woo hoo! The Dolphins actually came to play last week. Ronnie Brown and Chris Chambers both had effective games against the Bears. Look for both to continue their adequate fantasy play on Sunday. Other than that, there isn’t too much to get excited about. It looks like Daunt’ Culpepper will be out for the rest of season, so it might be time to abandon that ship if you haven’t already.

N.Y. Jets at New England – There are some divisions where two teams from them will always put on exciting games. The NFC West is a good example of this. Then there are some divisions where it’s just the opposite. The AFC East has quickly dissolved into one of the more boring divisions from a fantasy football perspective. Other than Laveranues Coles, Tom Brady and the Patriots’ running back duo, I don’t think there’s much to be excited about in this game.

San Diego at Cincinnati – At what point do we get to talk about LaDainian Tomlinson as one of the five best running backs of all time? He is already ranked 29th all time in rushing yards and 14th in rushing touchdowns. I’m just saying the top five better make room for a new member soon. Anyways, expect Antonio Gates and Philip Rivers to get back on track this week. I even think Eric Parker is a deep sleeper pick if he stays off the injury report.

The Bengals are not exactly having a banner season, but some offensive components are working well. Rudi Johnson scored for the second week in a row and T.J. Houshmandzadeh also crossed the stripe. They are both starts again, but you should also keep using Carson Palmer and Chad Johnson. Eventually, this group will click.

By Andy Goldstein
Tags: Mikko Koivu
This entry was posted on Thursday, November 9th, 2006 at 4:36 pm and is filed under Andy Goldstein, Gridiron Goldstein. You can follow any responses to this entry through the RSS 2.0 feed. You can leave a response, or trackback from your own site.