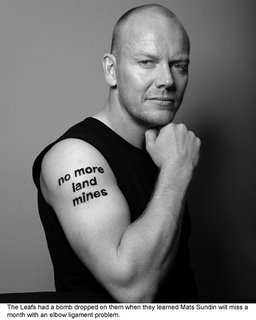 It hasn’t been a good week for Swedish superstars. First Mats Sundin goes out with an elbow ligament injury, then Peter Forsberg starts playing like he has one. For Sundin, he’ll be out about a month. While this will affect Maple Leaf power play mainstays (Darcy Tucker, Tomas Kaberle, Bryan McCabe), it does give more ice time to players such as Matt Stajan and Kyle Wellwood. Will the kids take more responsibility? More importantly, will they put up more fantasy points? Stay tuned…

As for Forsberg, he claims that the foot problem he had over the last few seasons has returned. I’m thinking that it’s also a shoulder problem — as in, his shoulders are sore from being forced to carry the team. Forsberg has been miserable lately outside of a game where he got 16 PIMs (if that counts in your league). Keep him — or any Flyers — on the bench for the time being.

Back in Toronto, Andrew Raycroft was injured during his return to Boston. Looks like Jean-Sebastian Aubin will be between the pipes for a short while.

Up in Ottawa, Ray Emery’s injury isn’t as serious as first thought. That’s good news because Martin Gerber looks pretty awful — so bad that the Ottawa press is calling him the second coming of Patrick Lalime.

MVP Watch: He may not get that much attention playing in Atlanta, but the Thrashers’ Marian Hossa has replaced Peter Forsberg as the most complete player in the game. He’s battling for the scoring lead, he’s defensively responsible, and he fights through checks like no one’s business. So much for the notion of the Thrashers falling apart without Marc Savard.

Speaking of Marc Savard, he seems to have finally settled into his new home in Boston. The Bruins still aren’t winning and Savard won’t approach his extraordinary point total last season, but at least he’s bringing some points home.

Back on the bus: Rookie phenoms Patrick O’Sullivan and Alexander Radulov have been sent back down by Los Angeles and Nashville, respectively. Look for O’Sullivan to return at some point on a Kings’ roster that has no one really noteworthy on it.

Keith Ballard is off the injured list. He’s a great all-around blue liner, but he won’t help the Coyotes score too many more goals.

Injury Watch: Martin Havlat was supposed to have returned by now. The oft-injured Havlat appears to be having complications. Similarly, the injury-prone Marian Gaborik is having nagging groin problems. However, their teams have reacted differently — the Hawks have fallen apart without their best player while the Wild continue to roll.

Off the Schneid: Last night, Jonathon Cheechoo broke a seven-game goalless drought and Rick Nash broke a 10-game goalless skid. Look for Cheechoo to return to Joe Thornton’s line pretty soon — they’re already back together on the power play. As for Nash, as he goes, so go the Columbus Blue Jackets. If he gets hot, look for a trickle-down effect on Nikolai Zherdev and co.

Tony Amonte broke out for his first two-goal game in several years. Don’t think the former Hawk captain is going to return anywhere near to his 40-goal form.

Stupid Trade Rumor of the Week: This isn’t fantasy related, but it had to be said — anyone who thinks that there is going to be a Jarome Iginla for Simon Gagne deal is an absolute moron.

Joe Nieuwendyk is back for Florida. He’s not the same player he was when the Stars won the Cup, but his presence seems to have a calming effect on the Panthers, plus he’s still a dynamic passer. Look for the Panthers to pick up their game a little bit with Joe back in the lineup.

Two out of three ain’t bad! Vincent Lecavalier and Martin St. Louis are on fire. As for Brad Richards, he’s having a respectable but not spectacular season. Down in Hockey Bay (as they call it), Johan Holmqvist is pushing Marc Denis for the starting job. Stay tuned…

By Mike Chen
This entry was posted on Friday, November 10th, 2006 at 2:07 pm and is filed under HOCKEY, Ice Chips, Mike Chen. You can follow any responses to this entry through the RSS 2.0 feed. You can leave a response, or trackback from your own site.