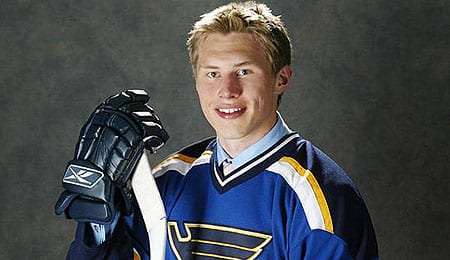 Erik Johnson is just the fifth American to go No. 1 overall in the NHL Draft. (usahockey.com)

Summer’s rolling along, so we better get cracking on our recap of the recent NHL Draft. Before you know it — perhaps as quick as a Neil Smith tenure as GM — hockey season will be underway, so let’s get cracking with the RotoRob Draft Recap, with the No. 1 pick, defenceman Erik Johnson, kicking it off.

Johnson looked like a lock to be a top 10 pick heading into the 2006 World Junior Championships. But his performance there rocketed him to the top of the heap, making him the favourite to be the top pick in the draft.

Two years ago, Johnson was playing for the Academy of Holy Angels in Minnesota. Soon, he’ll be a holy terror, striking fear into opposing NHL forwards who dare enter the St. Louis Blues’ defensive zone with their head down.

The U.S. development program really helped Johnson hone his strong work ethic and become a much better player. Having first started playing when he was about four years old, Johnson actually almost quit hockey when he didn’t make his Squirt A team, but instead decided to throw everything he had at the B team. T’was a wise decision for such a young pup.

Johnson, a 6’4″, 222-pound man-child, hails from the hockey rich area of Bloomington, Minnesota (in fact, he became the first Minnesota-born player ever drafted first overall, but fifth American-born player to turn the trick). He’s a very tough player — accumulating 88 minutes in penalties this season. Johnson is also a very strong skater who is incredibly physically skilled.

Although he might be good enough to step right in and help the Blues this coming season, Johnson will honour his commitment to the University of Minnesota and play college hockey. But don’t worry, he’ll be well worth waiting for. Johnson is perhaps the best defenceman prospect the NHL has seen for 15 years, and in short order this 18-year-old will help make St. Louis fans forget all about having Chris Pronger (a player Johnson is often compared to) bail on the team last year.

By RotoRob
Tags: 2006 NHL Draft, 2006 World Junior Championships, Academy of Holy Angels, Bloomington, Chris Pronger, Erik Johnson, Minnesota, Neil Smith, NHL, NHL Draft, St. Louis Blues, Sweden, U.S.A., Under-18 World Championships, USNTDP U-18
This entry was posted on Sunday, July 23rd, 2006 at 9:20 pm and is filed under Draft report, HOCKEY, RotoRob. You can follow any responses to this entry through the RSS 2.0 feed. You can skip to the end and leave a response. Pinging is currently not allowed.