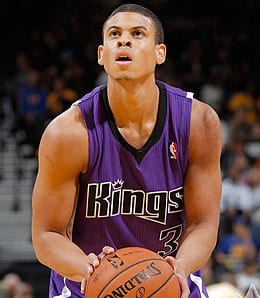 Ray McCallum Jr., PG, Sacramento Kings: Kings starting point guard Isaiah Thomas has already been one of the most improved Fantasy performers in the NBA this season. Now with he’s out of action with a quad injury, his backup McCallum, a second round pick last year, has opened eyes with several impressive performances. Over his last six games, McCallum has averaged 15 points, seven assists and just over one steal. There doesn’t seem to be a clear picture of when Thomas will return, so grab McCallum and reap the benefits. McCallum first popped up on the Fantasy radar about four weeks ago when he flashed some nice offense and showed some strong passing skills vs. Toronto (see video below).

J.J. Redick, SG, Los Angeles Clippers: Redick returned to the Clippers lineup earlier this week after missing two months with a fractured right hand. In the meantime, His ownership rate dropped significantly, providing Fantasy owners with a chance to grab a potentially valuable commodity for the stretch drive.

Greivis Vasquez, PG, Toronto Raptors: With the talented Kyle Lowry suffering a bruised knee, Vasquez has proven to be a valuable player for the surprising Raptors. In three starts, Vasquez has averaged 14 points, three assists and four treys. Even when Lowry returns, Vasquez possesses some Fantasy value off the bench.

Kent Bazemore, SF/SG, Los Angeles Lakers: The Lakers appear to have found a gem when they acquired Bazemore from Golden State. Buried on the Warriors bench, he has been a consistent contributor since joining the Lakers providing scoring, rebounding and impressive steal totals. Make sure Bazemore is on your team for the remainder of the season.

Brandan Wright, PF/C, Dallas Mavericks: When Wright was about to return from injury in mid-December we recommended him, and while he enjoyed a solid performance in December, he really hasn’t seen enough PT to be useful except in very deep formats. Well, that’s changing now as Wright has averaged 23 MPG in April, responding with some nice offensive numbers. Friday, Wright was perfect (10-for-10 from the field, 3-for-3 from the line) en route to a season-high 23 points with five boards, two blocks and a steal off the bench. He’s making a case for increased PT down the stretch.

Andray Blatche, PF/C,  Brooklyn Nets: Blatche has been invaluable to the Nets with Kevin Garnett out with back spasms. Blatche is averaging 13 points and five boards off the bench since the injury to KG.

Jermaine O’Neal, Golden State Warriors: JO’s minutes are being monitored, so this is a deep league special only, but on Friday he narrowly missed a double-double while blocking one, and on Tuesday, he enjoyed a turn back the clock effort with 20 points and eight boards.

Ronny Turiaf, C/PF, Minnesota Timberwolves: Turiaf and Gorgui Dieng have had to carry the load in the abscence of pivot Nikola Pekovic (ankle bursitis). While Turiaf won’t light up the scoreboard, he’s capable of double digit scoring with ample rebounds and blocks. Meanwhile Dieng has proven to be the “waiver wire” MVP of March/early-April.

Mason Plumlee, C/PF, Brooklyn Nets: Death, taxes and a Plumlee playing for Duke University are three things you can always count on in life. Mason Plumlee has made a nice transition from college to pro and finds himself a key defensive element of the Nets attack. Much like Turiaf, he’s more of a rebounding, shot blocking type who continues to show gradual improvement.