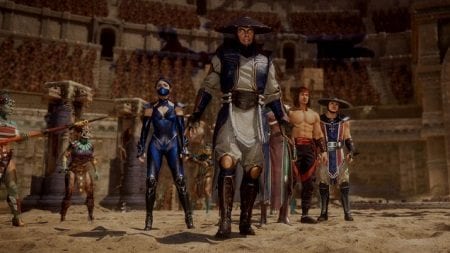 In the same way people like Coke or Pepsi, McDonald’s or Burger King, for us the fighting genre has always been divided into two types of gamers: Street Fighter fans and Mortal Kombat fans. While we’ve unleashed our share of hadoukens over the years, we’ve always been firmly in the camp of the latter. It felt simpler, grittier and, of course, bloodier. The series undoubtedly went through some ups and downs over the years, but Mortal Kombat 11 is proof the franchise has never been stronger.

Let’s just get this out of the way: playing MK11 on the PS4’s DualShock controller is probably not ideal. We eventually got pretty adept at snapping off combos and quickly inputting button commands for special moves and fatalities, but the spectre of inadvertently jumping through the air just never went away. It’s less frequent if you can train yourself to use the d-pad, but doing so doesn’t feel as smooth when transitioning.

To its credit, the game offers up a robust tutorial system that starts with the basics and keeps adding more layers to what you can do. If you’re struggling with timing or execution it’s a great place to go and clean up your technique — the option to view a demo of any move, including how to time your inputs, can be very helpful. In addition to the general tutorials, there’s also character-specific ones available to help you learn individual moves.

Outside of the occasional missteps with the controller (which others may not even struggle with), Mortal Kombat 11 does a good job creating some intense battles, mixing single-use and level-specific moves with more traditional strikes and blocks to keep both sides in a fight. It’s exhilarating to turn the tide with a well-timed Fatal Blow — now tied to your health — and nerve wracking to watch your opponent come back from the brink.

It’s all very well balanced, and the implementation of separate offensive and defensive meters is one of the main reasons why. On the defensive side you can use it to spring off certain objects in the environment, typically to get out of a corner, or break a combo. On offense it can used to do things like amplify certain moves or grab background items to smash over your opponent’s head.

Visually, MK11 is impressive. The fighting arenas are diverse and include plenty of details, and the characters themselves look good. The inventiveness of the moves and fatalities are the real stars, though, and seeing the original characters still trotting out their special moves (like Johnny Cage‘s nut punch) is a nice little piece of nostalgia. The campaign contains tons of cut scenes, which seamlessly transition into fights, and is surprisingly enjoyable.

Part of that enjoyment also stems from the strong voice acting and solid dialogue that manages to tell a coherent tale. Music and sound effects provide a suitable impact, adding another level of satisfaction to cracking bones and otherwise brutalizing your opponents.

Back in the old days, fighting games came with a handful of characters, maybe a couple difficulty settings and a then a series of fights. We’re far from that now. Mortal Kombat 11 features a fully realized story mode that covers 12 chapters and should take around six hours to complete, depending on how much trouble you have with the fights.

Considering how nonsensical and convoluted some of the canon is, the developers did a solid job of working around it and creating something that’s enjoyable. Granted, you need to do some suspension of disbelief even within the lunacy — Cage just shook off have bullets ricochet off coins through his eyes during a fight but is then incapacitated by a gunshot to the leg — but that’s okay. Just don’t overthink it.

While the battles and story mode certainly qualify as fun, the Krypt isn’t nearly as engaging as you explore Shang Tsung‘s island looking for now-randomized loot boxes. That wouldn’t be a huge deal except that MK11 contains an obscene amount of customization options, many of which need to be unlocked by collecting the very treasure found in the Krypt. Alternately, you could always pony up some real money to acquire “time krystals.”

Yes, microtransactions are indeed a thing here. On the plus side, you can’t buy anything that would give you an in-game advantage against human opponents, so it isn’t “pay to win.” On the down side, the amount of grinding needed to unlock these items organically is daunting, so if cosmetic tweaks and simplified fatality inputs are important to you then you have a decision to make.

Old-fashioned towers are also available in abundance, some that mimic the old arcade version in which it’s simply win and advance, and others that are laden with modifiers. These are definitely a mixed bag as some of the conditions imposed end up feeling unfair. Sometimes these can be countered by using consumable items, but you’ll need to gather those in other modes (read: more grinding).

Thankfully, you can always step away from the grind and jump online for the PvP battles that the game was founded on. This is often where fighting games — which rely so much on precision timing — struggle, but it’s here that Mortal Kombat 11 separates itself. The performance was consistently excellent, even with less-than-ideal connections, and it’s here where all the smart tweaks made to the core fighting really pay off.

It’s funny that for all the extra content designed to keep you tethered to MK11, it’s the basic one-on-one fights against other people that really give the game its longevity. And with more than 20 unique characters to master it promises to keep us engaged for months to come.

Although Mortal Kombat 11 contains some tedium for those that want to unlock all its extras, the actual gameplay is tight, diverse and exhilarating. In short, it’s one of the better fighting games we’ve ever played.