Wire Troll: Goin’ Back to Philly…Think So? 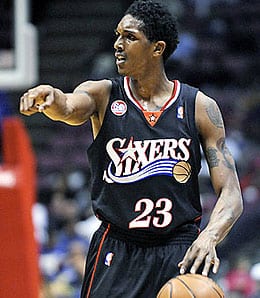 Without Louis Williams to direct traffic, the 76ers have a big hole in their backcourt.

Welcome to the Week Six edition of The Wire Troll. We hope our American readers had a peaceful Thanksgiving, and we’re thinking that your last bite of turkey tetrazzini probably exhausted your poultry fix for a while. Shake off the tryptophan and brighten up – it’s time again to hit the wire.

We try to avoid leftovers here at The Troll, but this week we have to revisit a couple of players whose attraction just doesn’t seem to be catching on. Injuries are again playing a large role in the Fantasy landscape, as promising 76er point guard Louis Williams will miss eight weeks with a broken jaw. With Elton Brand also hobbling around, the Sixers are rumored to be in the market for a guy who can score and play the point; hmmm… wonder what The Answer to that riddle might be? Yep, Allen Iverson is reportedly close to inking a deal with his old team, and given Philly’s depleted roster, he could become Fantasy relevant in a hurry if he indeed signs. If he’s hasn’t already been scooped up in your league, AI is definitely worth a speculative pick up.

Jason Smith, Philadelphia 76ers: With Brand nursing a gimpy hammy (What? Brand? Injured? Imagine that…) over the past few days, Smith has averaged 12 points, 4.7 rebounds, 1.7 blocks, and a trey per game. While it doesn’t look like Brand will miss significant time, if Smith can at least partially fill the role Marreese Speights played earlier this season, he would have some Fantasy value. For now, Smith should be rostered in super-deep leagues, but keep an eye on Brand’s ever-creaky body.

Robin Lopez, Phoenix Suns: On Friday, Lopez made his 2009 debut after missing the first month of the season while recovering from a broken foot. The seven-footer played just over 15 minutes, collecting eight points, seven rebounds, one steal and two blocked shots. While he doesn’t look like a threat to steal too much of Channing Frye’s thunder, Lopez should see a fair amount of playing time going forward – especially in one-sided affairs.

Mike Dunleavy, Indiana Pacers: Dunleavy, who has played in only 18 games since the 2007-08 season due to knee and hip injuries, returned to the court Friday. The swingman garnered 13 points, two assists, one steal and a block in over 15 minutes of playing time. Though he’s a huge injury risk, the fact remains that Dunleavy averaged 19.1 points, 5.2 boards, 3.5 assists and 1.1 steals over 82 games back in ’07-08. He should already be owned in deeper formats, and just about every Fantasy owner will want him on their squad if he can regain his old form.

Al Thornton, Los Angeles Clippers: Thornton had been putting up a ton of points lately, but a five-point clunker (including 2-for-15 from the field) Wednesday knocked that train right off the track. He recovered nicely with 19 points the following game, though – and threw in four rebounds, three assists and a blocked shot for good measure in an atypically balanced Fantasy line. Points are generally about all you’ll get from Thornton, but his 14.2 PPG average in November is certainly serviceable in larger leagues.

Ersan Ilyasova, Milwaukee Bucks: Here is one of our Thanksgiving leftover players for you to consider. We featured Ilyasova last week, but his Yahoo! ownership is still hovering around the 30 per cent mark. All he has done in six games as a starter is average 13 points, 7.7 rebounds, 1.2 steals and 1.3 treys per game. Perhaps his third double-double of the season on Friday will get a few more folks’ attention, but if you’re in need of threes and boards check your wire for Ilyasova – chances are he’s there.

Jamaal Tinsley, Memphis Grizzlies: Yeah, yeah – there are more red flags here than a Manchester United home game, but Tinsley has quickly worked his way into a prominent role in the Grizzlies’ rotation. He outplayed and saw more action than starter Mike Conley on Friday, tossing in 16 points, doling out five dimes and draining a pair of treys. He looks to have earned a place on most larger Fantasy rosters, but he’ll almost certainly remain in a time-share for at least the near future.

Darren Collison, New Orleans Hornets: Hopefully you heeded our advice of two weeks ago and grabbed Collison, who’s doing a very nice job filling in for the injured Chris Paul. In six games as a starter, Collison has averaged 14.7 points, 3.7 rebounds, 6.7 assists and one steal per outing. Despite that productivity, he is still owned in only about 20 per cent of Yahoo! leagues. We’ll say it again: Do the math: NO – CP3 = DC. One caution for those of you in those wacky weekly lineup leagues: only two games for the Hornets this week.

Jarrett Jack, Toronto Raptors: You may not know Jack – but you probably should. The Raps’ sixth man has been on a nice run recently, and he’s the kind of player you grab when he’s going well, then cut when he cools off. Jose Calderon has not delivered the kind of numbers many were expecting, while starting two-guard DeMar DeRozan has averaged only 18 minutes per night. Enter Jack – who has averaged 12.2 points, five assists, 1.6 treys and 28 minutes in the five games since November 20. If he supplants DeRozan as the starter, Jack’s value could shoot up in a hurry.

Jrue Holiday, Philadelphia 76ers: The 17th overall pick in the 2009 NBA draft will be called upon to fill the big shoes of point guard Williams. Holiday started for the Sixers against Boston Wednesday, scoring 10 points and dishing out six assists. He regressed badly the next time out, managing just two points (on 1-for-8 from the floor) and five assists. Holiday’s shooting woes (23.8 per cent in two games as a starter) have served to fuel the turbines of the AI Rumour Mill.

Allen Iverson, free agent: As The Troll goes to cyber-press, speculation is rampant that Iverson may be returning to his old digs in Philly. Reports suggest that he may sign this week, and if so, we’d expect The Answer to be back in the starting lineup – and possibly even at practice – before long. Iverson is owned in less than one-third of Yahoo! leagues, and the upside he presents is just too great to ignore. If you have bait to cut, take a flier on AI and watch how the next few days play out.

By Buck Davidson
Tags: Louis Williams, Philadelphia 76ers
Posted in BASKETBALL, Buck Davidson, The Wire Troll | Comments Off on Wire Troll: Goin’ Back to Philly…Think So?